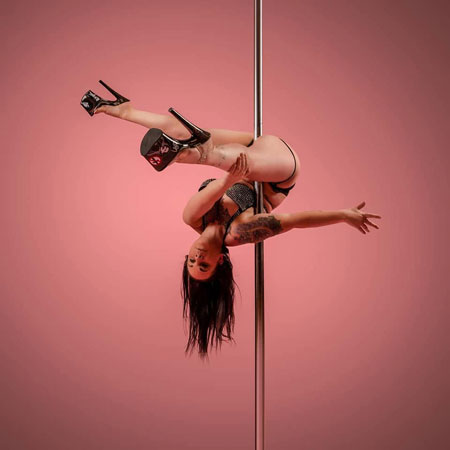 PDC Approved 4 star pole dancing instructor Emma Nicholson said "Kara is an extremely motivated and inspiring instructor who endeavours to bring out the best in her students, she has a relaxed, friendly and approachable manner which makes her extremely popular among students and her peers.
As well as teaching and running her studio Kara runs a competition. ‘The Authentics’ stripper- style competition was the first of its kind when it appeared on the pole dance calender around 6 years ago, Kara had a vision and has worked hard to build it up to the huge national event it currently is with numerous regional heats and a huge loyal following that grows each year.

Kara has many years experience within the pole industry and a very good understanding of teaching pole. She is a warm, wonderful person inside and out and I support her Four Star Instructor application."

PDC Approved 4 star pole dancing instructor Katie Whitely said "Kara has continually worked hard to give her students everything. She has created a community which is much needed in our industry, giving people the ease, opportunity and none judgemental right to express themselves. Organising events and running them consistently each year is super hard work, Kara is dedicated to giving her students/community what they need. I’m proud to say she is my friend and business hero. She has grown so much as a person in the time I’ve known her, you can expect support, loyalty commitment and kindness when being taught by Kara.

I did the first authentic competition not long after id met Kara. I was amazed at how the people around me danced and how it was brought together. The following year i did the comp again and i won my category. The whole experience was amazing. This prompted me to want to teach pole!! Kara then became a friend, sharing similar experiences in life we leant on each other for support. From there on we’ve been all over learning new things, helping each other with showcases and even taught a workshop together!! All this is just a very small piece of Kara’s extremely large heart that has such s lot more to offer to new and loyal students alike."

2019 results pending:
Spin City’s Aerial Hoop for Beginners
Yoga Level 3 ( I have been very carefully studying this for the past 18 months and will be doing 16 sessions of exams March 2019)
GP referrals
Obesity and Diabetes Level 4
PDC Dancers Grading Level 5 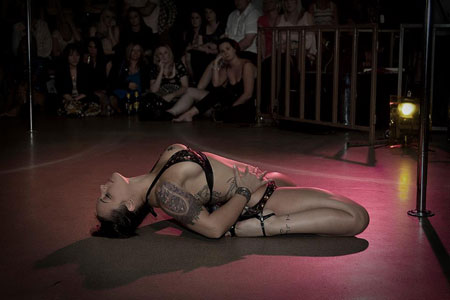 Teaching History:
I have been teaching pole dancing since 2009 and opened my own studio in 2014.
Prior to opening my studio I went on tour from 2012-2014 with my BootyLush workshops were I had the great pleasure of teaching at: Emily's Pole Fitness in Swindon, Studio Boutique Hull,  Scottish Pole Convention for 3 years, Diamond Notion Poole,  PB Dance & Fitness Scotland, Scarlet Fever Pole Fit Scotland, Elite Professional Pole Fit Wigan, Natasha Gray Newcastle.  BIP Convention for 2 years.  Taught intermediates pole dance at U Pole Liverpool.

Since February 2014 I have been teaching students of Wigan from beginners to advanced pole dance.  We have a daily and evening sessions 6 days per week.  We have fun learning all the fundamentals of pole dance creating new friendships and building confidence to Wigan Women.

Student's pole dancing success:
I encourage students to dance and create dance pieces that represents them and how they are feeling.
Through this I have had over 80 students hit the stage and perform in front of friends and family.
Kirsty Jackson went on to open her own studio and has entered competitions with the great support she has from other schools also.
Lauren Gaskell entered The Authentics 2015, really busted her confidence and gained her the goal of performing live.
Natalie woodward winner of The Authentic Pole Dance Intermediate Category 2014.

I am currently awaiting my results for Spin City Beginners Aerial Hoop and will be enrolling onto their Stretch and Flexibility course.
I read and study a lot to ensure I am up date on the pole industry and health and safety.

I also arrange and go training with fellow pole dancers at my studio and theirs.  Having pole gatherings is great as we catch up, share our skills and train together.  We have Alison Jolley,  Sonia Allcock, Toni Misty, Katie Whitley, Sarah Precious, Ingrid Leham and Crissy Lopez, Wendy Holmes and Claire Wilson, when we can manage a full gathering is great.

I train regular with my close friend Justine Ashworth, this is when I really get to focus on my goals and ensuring my knowledge and skills are up-to-date.  Also I attend work shops of other pole dancers and dancers.

Competition Achievements:
For the past 5 years I have had the great pleasure of running The Authentic Pole Dance Competition.  Back in 2013 I never dreamed it would turn into the competition it is now.
It has grown into a large UK based competition starting from a small idea, to having to split the competition into heats across the Country so we can allow more entrants.
I have built a great team who work with me and follow The Authentic Way and Passion as much as I do.  Our current team is Myself, Alison Jolley, Kirsty Jackson, Katie Whitely, Sally-ann  Giles, Pammie Cameron,  Sonia Allcock, Amanda Polelove and Victoria Clark.
We have had 48 dancers through into the finals each year from 2014.  And we’re all set and ready for 2019.

Sponsorship (gained or provided):
We have sponsorship for The Authentic’s 2019
Creatures XIX
Shoegasm
Wink Designs

Charity contribution:
I am so proud of the amount of charity events I have organised from 2009 I organised shows for my students and instructors to create amazing pieces from themes we chose on a yearly basis.  I have also done challenges on my own, climbed a quarry, hiked Scarfell, completed a 10k course, arranged a family reto fun day.
Charity’s I have organised and helped raise money for:

Pole Dancing Goals & Aspirations:
I continue to embrace my studio and students.  Encouraging and supporting people throughout their training.
I have a few courses currently I am working on and set to complete these this year (2019)
Continue to attend and host pole dancers to keep my skills up and for my students to get to meet and train with other dancers.
First one of 2019 I’m looking forward to attending Sally-ann’s for Heidi Hildersley Lyle workshop

Professional Pole Appearances:
I have had the honour of performing at many pole events:
From 2009-2013 managing Pole Seduction Wigan I have done over 9 performances for shows I have organised for charity events.