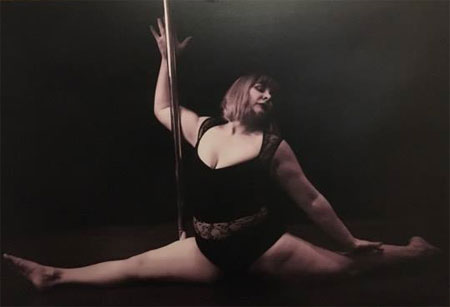 When some people think of pole dancing they conjure up a specific body image but PDC Approved 3 star pole dancing instructor Gina Mellor wanted to offer classes to a wider audience. Gina started her 'curvies classes' for women of size 16+.

We spoke to Gina to find out what made her set up the classes and what her members gain from the curvy class.

"In every single group lesson held at Pole Krazee there'll be at least one curvy, (for a curvy lesson you have to be size 16+) I don't give the options to help create a body issue problem I give it because I believe it's more a mental factor, after all pole is also about building confidence up as well as strength and technique. If your/our mind is weak it can take its toll on our bodies. As a pole school owner or instructor that advertises for lessons open to anyone you'll know that you'll never be sure of who will walk through those doors based on age, size, race, height so many factors. The only thing you do know is you for that one hour all have one thing in common, pole.

"Having that class as an option for those who feel self conscious with their figure is just brilliant, at least until they realise that up the pole it doesn't matter"

In my curvy lessons we all walk in with three things in common, pole, size and mentality. I'd 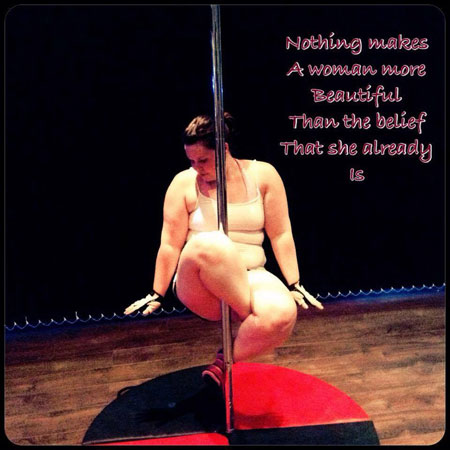 been teaching for 2 1/2 years before I decided to offer a curvy lesson and it was through that experience that I decided to do it as I felt so many people were missing out on having a pole journey in their lives. Lets face it we all know the rewards you reap from benefiting by a pole journey in your life. Take a look at Dayna Wetherall (read more about Dayna's pole journey and how she copes with Cerebral Palsy Left Hemiplagia).

Weight loss, weight gain, mentally, physically the list is endless and another story to be told. But when you see a poler walk through your doors and they leave after a few weeks or months and they say it's because mentally they're always comparing themselves to others, even though they felt welcomed by both members instructors I felt sad as it was and is still the case I see someone smile so much and feel an achievement and it helps their confidence grow to believing in themselves more and less time mentally torturing themselves by judging themselves.

So for mental issues I started curvy lessons at PK as I knew that the mind was as important to rebuild as it was to learn knowledge and strength from pole. By giving someone the choice to be comfortable in their own skin surrounded by like minded women is half the battle for some members. It's not always the case of how they look but how they think. As someone that lives with mental disabilities, and have from birth, only diagnosed in later life I understand what it's like not to be in total control of your thoughts at times. I by no means pander or make a curvy lesson easier than any other lesson I teach, I simply adapt, there is no I can't do it, maybe not today but tomorrow once we adapt we can be that step closer as long as it's all in a safe environment and instructions. When I started pole I was at one of my biggest, only a size 16, but to some that's big, to me it was as whilst I've fluctuated in life size 16 getting close to 18 was my biggest for me (see picture left of Gina before and after).

This was me before pole then 18 months later. So I have some understanding to having getting a bigger butt up that pole, it ain't easy I'll tell you, but best thing that comes from it, once you drop the weight you still throw your ass up there like it's the size of your first lesson, but with greater strength and ease. I understand you may not get your hand around that thunder thigh for your Allegra, well lets take a different route. I may not take you down the same path as everyone else but I'll get you to your destination, that's why I started a

curvy lesson. Not everyone's beginnings is the same, just as not everyone's endings will be happy. Lets try that Allegra with your inside hand using a cup grip on the pole on the inside of the thigh instead of around it. Don't complain your thigh is already the waist size of a skeleton with a skin graph, use it to your advantage and gauge a pushing grip by extending your leg into it. Use what you have as a advantage, when people ask why they need shorts rather than leggings, I say the more skin the grip.

Again personally know this, more skin more grip, hurts more at first but your body becomes more accustomed to it. I'm passionate about teaching anyone, but like the options of, kids pole, teens pole, men only I like to give the option of curvies as well. It's an option, it's not a segregation, I'm allowing those that struggle with accepting themselves around others to be around people that have even more than one thing in common when they walk in those doors alone.

PK members are very diverse, I like to think PK offers anyone, no matter how they choose to live their life, to be accepted without judgement. That judgement doesn't have to come from others, coming from yourself is enough. I merely give a choice of another door opening should you want to choose that way. There's nothing wrong in that choice, better trying than not knowing. That's the chance I give some curvy members should they choose that route. Doesn't mean they won't get to the same destination as you, just their journey is different to yours.

I offer a weekly team instructor meet where we work on some strength work, lesson plans, sharing out of the box experiences, our experiences, helping members, etc etc. I help and as a team we help one another to be able to instruct on a mixed ability lesson and dealing with people as individuals rather than stereo types. My curvy lesson is not a stereo type, it's an option for this."

Here is a testimonial from one of Gina's students, Julia:

"When a friend suggested to me that a good way to keep fit was to do Pole fitness I laughed at the idea. Being a size 18/20 I thought there was no way that a piece of metal could hold me and with very low self-esteem I thought I would just look really stupid doing something that is normally taken up by skinnier ladies, or those of a more athletic and trim figure. 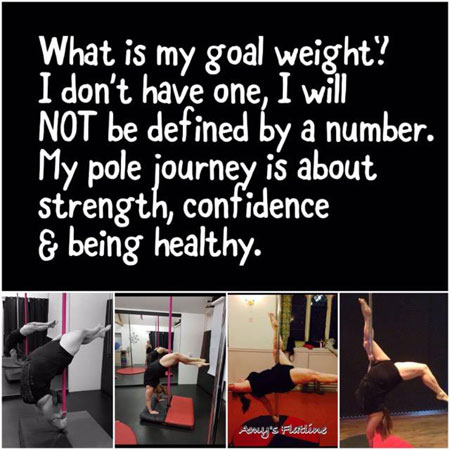 Then she told me about Gina's Curvy class. I was curious but still didn't think that it would've been any good to me - after all some retailers make clothes for 'curvy' or 'larger' women that are size 14 and being totally honest this was what I thought it was. I decided to go along for the first lesson - after all what did I have to lose and besides, if it was skinny ladies I wouldn't see any of them again and I didn't need to go back did I?

I tentatively went along for my lesson, and was greeted by other ladies who were there for their first lesson, and were the same build as me - surely we couldn't all have got it wrong. Then we met Gina,I had been so wrong, this class was for larger ladies and we were never made to feel that we shouldn't be there, Gina actively encourages us to give everything a go. She always included us and whilst she made us feel special, as she does with all of her students, we didn't feel like freaks as I thought we would. When it came to inverting I was very cautious that Gina could help - she has a small frame but her strength is amazing! She got us inverting and it was such a liberating feeling. Gina's Curvy class is a brilliant idea - it meant that I could take part in a lesson without feeling like a fat freak and going along that first night was one of the best decisions I've ever made. Thank you Gina!!"

Gina tells us more about her students pole journey's: 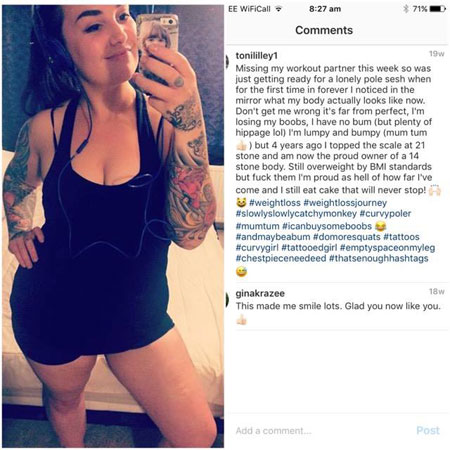 "Anne started, and maintained, staying in a lesson open to everyone, and I'm very thankful for on my first night of teaching curvy lessons I invited Anne and another friend Tash to show their poles skills off that evening as I knew it'd cross the curvies mind about me being an instructor and what would I know about poling with some chunk how would I spot them. I knew I had to gain the trust of those ladies that turned up in that one hour, oh I knew and you most certainly won't fall from that pole whilst I'm spotting you. I'm not saying any poler will not have a fall, as we do whilst poling without a spotter, (and unfortunately for some whilst with one) but whilst I'm spotting you you won't, no matter what your size.
This is Anne on the pole, Anne is in her late 40's, she worked as a dentist and became a very good friend who recently emigrated to Australia, I'd like to think her pole journey helped her to decide this life changing decision, I'm sure if she sees this article she will leave her opinion. I'd like to think I helped Anne to love herself for the beautiful lady she was, both on and off the pole.

Meet Toni (pictured above right and below left), she is one of my regular curvies about two years now, she started in a regular lesson for a couple of months then chose curvies as a regular and other lessons as a second and third lesson.

Gina then told us about Clair's story:

"Many years ago I tried my hand at pole when a friend arranged a party for her birthday and found I had as much coordination as a very uncoordinated person. I tried a 2nd time with the same studio and just didn't feel the love. Fast forward a good few years and I saw an advert for a beginners class at a studio nearby my house, so thought I would give it another go. I started in a "regular" class but knew someone in the "curvy" class and she suggested I come to one of them once as a change. The studio members and instructor's are so supportive, and class hopping has never been an issue for me, but I will always be a curvy girl. Having that class as an option for those who feel self conscious with their figure is just brilliant, at least until they realise that up a pole it doesn't matter and want to try another class.

So for all those people that are offended by a curvy pole lesson only, that's only 50%, the other 50% are glad they've got that choice. Without it, they'd never been poling and joining in with our love and passion without it. So moral of the story is, you maybe size 16,18 or 20 (UK sizes) and you can just walk into a pole lesson without the option of a curvy lesson only and that's bloody awesome, but don't take those pole lessons away from those that can't do what you do!!! After all, don't we spout about how welcoming the pole community is, does it matter, really, how we join??