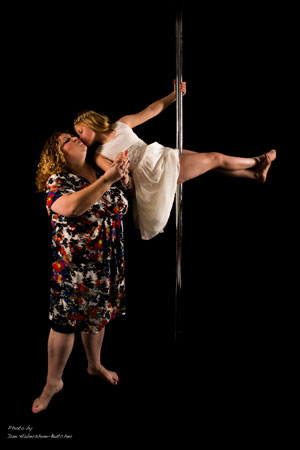 My name is Kelly James, I am the Mother of Amelia James (Mimi) and here is her story;
I started working for a lady Called Ruth Mills in 2011, Ruth had taken on a huge venture and opened ‘Ruth Mills Therapies’ in Brimpton. Ruth had renovated and opened a hair and beauty salon, dance studio and therapy center all under one roof – I joined as her hairdresser and took over working in the salon for her.

Mimi (who was 6 at the time) had been dancing since she was 2 years old, from the minute she could walk she was dancing!

Mimi wasn’t fussy what kind of dance she was doing, ballet, tap, pop, street, cheerleading, gymnastics, she loved it all!

One day I had to sort something out at the salon and both of my children were with me at the time and Mimi had seen Ruth teaching pole fitness in the studio and was immediately taken by what the girls were doing, Climbing, spinning, going upside down and then the  persuading started  ‘Mummy, please can I learn pole?’ ‘No! You are too young’ was my reply, ‘but Mummy please?’ and this went on, and on, and on and on!!! 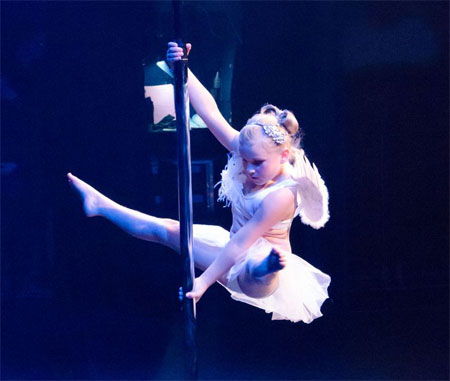 would ask Ruth if she would teach her. One day Ruth and I agreed that we would let Mimi try to see how she gets on but she was simply too young at that point to understand the importance of being safe and knowing that falling would hurt, So for a few months we both said no! 6 months went by and I had had constant “Mummy please!” conversations from Mimi we tried her again and she did really well.

Mimi took it seriously, listened to Ruth, did as she was told and she was getting on very well. That Christmas Mimi got her very own pole for her room that she could practice on at home. This was a good job really as on the 2nd of January 2013 Ruth Mills's studio and my salon had a fire which swept through to the roofs of the buildings and we had to find a new home for both business's. 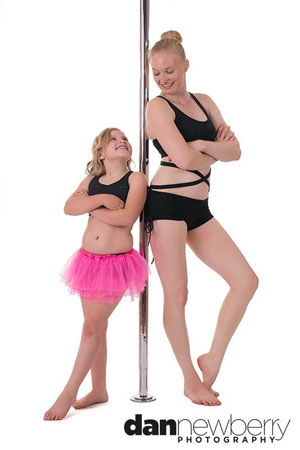 Many months went by and Mimi wasn’t having lessons as there was nowhere really to teach her so she kept on looking at her Pole bible and taught herself new moves. In September 2013, Mimi entered a competition called ‘Newbury Talent 3’ and although when the judges first heard that one of their acts was an 8 year old pole girl they were unsure about it but once they saw her perform there was no question that she had to be in the competition.Mimi went up against, semi professional adult singers, comedians and other performers she ended up coming 2nd and she was over the moon.

From that point Ruth decided that she would find a way to teach Mimi pole and she started training again twice every week and she still has her pole at home to do extra bits. Mimi decided that she wanted to audition for BGT so we took her, she performed at the preliminaries for the World Pole Championships with thanks to Kay Penny and she auditioned for Got To Dance in 2014 and got through to perform in front of the judges.
Mimi got up in front of Ashley Banjo, Kimberly Wyatt and Adam Garcia and performed beautifully to ‘I dreamed a dream’ by Susan Boyle and although she didn’t get any further this year they had nothing bad to say about her in fact they were blown away by what this little 8 year old could do and how strong she was, I was lucky enough to get tweets from them afterwards!

For Mimi, she got what she wanted and she wasn’t upset that she didn’t get through, she 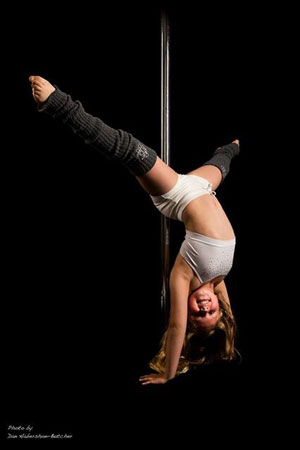 simply said “I will try again next year Mum” Her performance was tv on Sky 1 in the warm up show.

For Mimi’s 9th Birthday we surprised her with a private one to one lesson with her ultimate idol Bendy Kate, she was over the moon and learned so much and worked very hard indeed!
Mimi decided that she wanted to train for the UK pole sports championships so I decided to get a one-to-one lessons with Charlotte Robertson. Mimi learnt so much from Charlotte and it really opened her flexibility working with someone as amazing as Charlotte.
Then sadly Mimi's training had to come to a bit of a halt due to my mother having to have a double heart bypass in London and me being required to look after her on her recovery so Mimi dream of pole sports last year didn't happen!

Mimi has performed in many of the Spin City Showcases, she performed as a guest at Miss Pole Dance in 2015 and from there she started to want to perform more often so I decided to have a chat with Varie Anderson at the UKPPC to ask if there was any way Mimi could perform at the UKPPC? 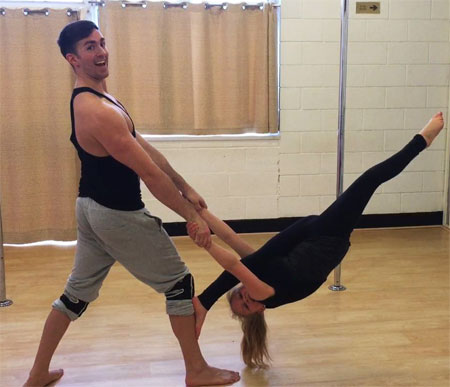 Meanwhile, Mimi started having lessons with Dan Rosen at Spin City Newbury whenever he was there, I quickly saw this to be a very good partnership as Dan seem to understand her and could pull out her potential. Then I heard back from Varie asking is Mimi would like to open the show for the UKPPC 2015 - this had been a dream of Mimi's since she first went to the UKPPC 5 years ago! There was much screaming and jumping around from both of us with that news, what a fantastic opportunity!

Mimi loved every minute of being on the UKPPC stage and can't wait to be old enough to compete there!

So what's next for Mimi? 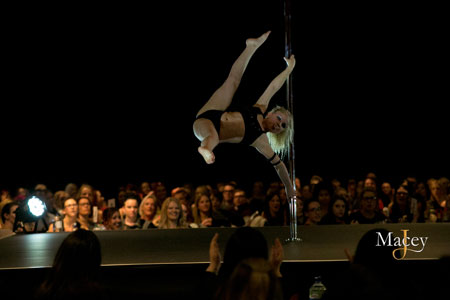 last year and hopefully one day represent her country in the sport that she loves so much.
Mimi and Dan are working very very hard indeed to try to get her competition ready, she had the honour of guest performing at Dan's IFA Showcase last month. Mimi has also been entered in to 2 other competitions next year as well so the future is looking exciting for her she just has to keep on believing in herself and working very hard!

I can’t tell you how proud I am of My little girl, she has such a fantastic attitude towards pole and this echoes through her school work, friends, home life, everything, she never gives up, she always works double hard, she is incredibly comfortable in her skin, Mimi know exactly who she is and she is happy with that. Pole has been such a positive influence in Mimi’s life and I do believe that it comes from her instructor's Ruth, Dan, Charlotte and Bendy Kate and all of the other fantastic 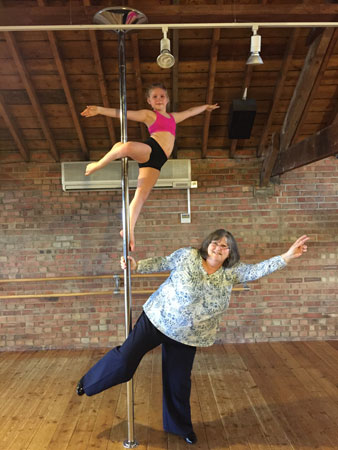 people she has met along her journey.

People don't always understand when I tell them that my 10 year old little girl is a mini poler and when she grows up she wants to be like Dan teaching pole and Bendy Kate and be world champion. They all raise an eyebrow and then I find myself defending my decision to let her pole. So what I do now is show them her performance, I ask them to reserve judgment until after they have seen her perform!

Mimi and her older brother Josh have both had to endure bullying at school due to Mimi's sport and it's hard to explain to a 10-year-old and a 13-year-old that these people just don't understand, they are narrow minded and probably somewhat jealous!

When people say 'but why pole, why don't you just let her do gymnastics?' I think to myself 'why not?!' My girl was born to fly and who knows what the future holds for her but I am as sure as hell going to be in the front row supporting her!!!