This Girl Can Pole!

How one woman fought for every sport to be included in the national campaign! 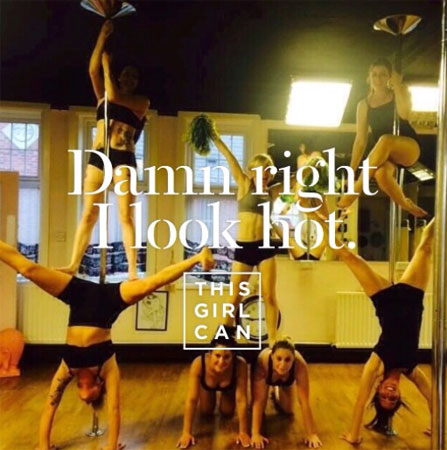 Charlie Foster, 38, is a PDC Approved pole dance instructor from Nottingham who has been a part of the sport for 3 - 4 years now. Pole dancing makes her feel surprised, strong, proud and sometimes frustrated, however the main reason that we are focusing on this inspiring woman is because it makes her feel empowered,

and she believed above all else that this empowerment from pole dancing should be shared with the world.

"What they can do is up to them, but the campaign is really emphasising the fact that you do not have to be young and a size 6 to pole dance."

Charlie had noticed the 'This Girl Can' campaign all over the country representing different sports and all different kinds of women, however she had yet to see pole dancing as a part of the campaign. When she approached the campaigners, she was initially ignored, however she pushed to prove to them what her studio taught, as well as what her students can do, and she finally got the recognition both she and pole dance deserved, as she was invited to be the ambassador for Nottingham. She had fought their judgemental views by pointing out that a national campaign should include all sports which make women feel empowered, and proved that pole dancers have nothing to hide.


Since the campaign launched, Charlie has heard every excuse under the sun about why people may not able 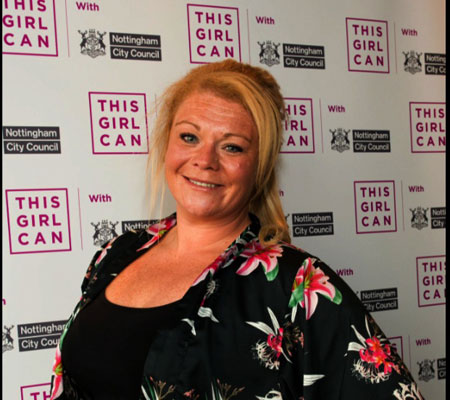 to pole dance, and she hopes that she has now expelled some of these myths. If she can get people stepping into the studio for the first time, then she has spread the message just a little further each time, and in that she has reached her goal. Because of the campaign, enquiries about pole dancing lessons at Pole Palais, Charlie's studio, have been through the roof! They have been receiving two or three calls a day which is incredibly good traffic for pole dance studios during summer.

"I'm slow, but I'm lapping everyone on the couch" ...... Just because you're not very strong, flexible or fit does not mean you should not aim to be.

The campaign is not only great for business, but also wonderful for showing women of all ages, sizes and shapes that they too 'can'. What they can do is up to them, but the campaign is really emphasising the fact that you do not have to be young and a size 6 to pole dance. Charlie herself is a size 14, and most pole dancers around vary massively in size and shape, as well as age. While there are multiple pole dancing/fitness societies at universities for younger pole dancers, the vast majority often fall within the 30+ age bracket, with new mothers often using the sport to shed the baby weight, making it comparable to Zumba. The 'This Girl Can' campaign is proving that every achievement in every sport is worth 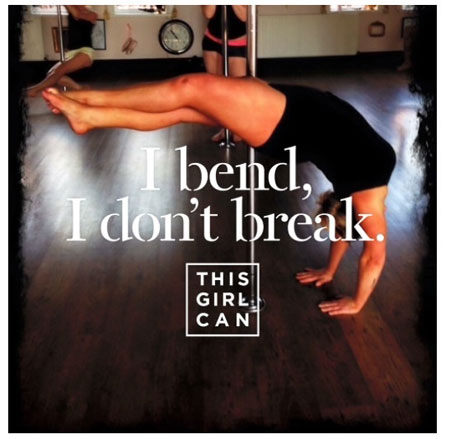 more than sitting at home doing nothing. One of the sayings is "I'm slow, but I'm lapping everyone on the couch" which is exactly what Charlie is trying to push forward. Just because you're not very strong, flexible or fit does not mean you should not aim to be.


Charlie wants to represent pole dancing in the most positive light possible, and show women that it is a sport that will reach above and beyond their expectations. It is also a wonderfully friendly environment, where you will make friends for life who will support you both on and off the pole. Charlie believes that this is one of the best sports for female empowerment because it can build your confidence in a huge way and it forces you to realise your own potential, and stretches it far beyond what you might have ever thought was possible.


Finally, Charlie believes that while the Pole Dance Community, its members and like-minded pole dancers are doing their best to gain recognition for the sport, either through positive media, competing and performing or just sharing it with people they know, there still is more that could be done. She believes that the women behind the scenes should be shown more, as although they are not putting themselves onstage, they are the people that make it possible for anyone to get onstage in the first place. Charlie is one of these people from behind the scenes, and we are extremely proud to recognise her and her brilliant campaign, which we believe will improve recognition and general views of pole dancing in the long run. Thank you Charlie for your wonderful contribution to the Pole Dance Community!