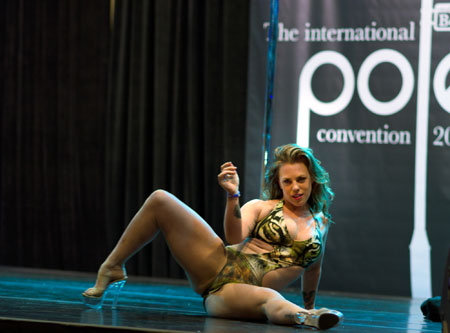 In her latest performance at Pole Con 2015, Annemarie Davies, founder of United Pole Artists surprised her audience by removing her top during her piece. Davies states that the initial reaction was surprise, then the audience continued watching her piece happily with no complaints. The audience had received a warning that there may be nudity during the show, and that if they would prefer not to see this, they should leave. Davies was completely within her rights to reveal her body to her audience.

"If some people are offended by seeing a pair of breasts on stage, or if they do not think it necessarily ties in with pole dancing as an 'art form', then they should simply turn the video off."

Since 2002, Annemarie has been pole dancing. When she began, there was a lot less recognition of pole dancing as a form of fitness and exercise, and so she naturally learnt the sexy side of pole from the very beginning. Davies does admit, though that she dances the way she feels which is often sexy, empowered and confident, and so her 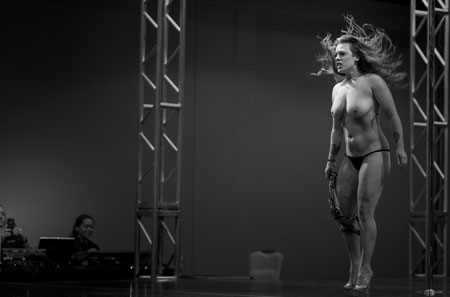 chosen style of dance is her own choice and has little influence from her training. No stranger to dancing sexily and performing topless, Davies says that her decision to go topless was not a hard one. She had forgotten to buy pasties which would have covered her nipples, so when she found out that she had permission to remove clothing, she decided this would be the easiest way of solving the problem. She had practised extremely hard for Pole Con, and had become confident in her worm and voguing in order to include it in her routine. These were new, exciting ventures for Davies, yet she has learnt many dance styles over the years, making her a versatile and interesting dancer.


For Annemarie, her favourite thing about performing is the way energy changes in the room as she dances. She states that without the audience's energy, performing is moot. As an entertainer, wanting the audience to feel engaged is completely natural and you often feel disappointed in yourself if they seem bored by your routine. Her incredible floor work is amazingly self-taught, and really shows Davies' level of commitment to pole dancing, as she has gone out of her way to learn new ways of captivating and impressing an audience. The audience at Pole Con consisted of mainly adults, yet there were a handful of children there; their parents had chosen to let them stay and neither Pole Con or Davies herself has received any negative feedback from adults with children at the event. 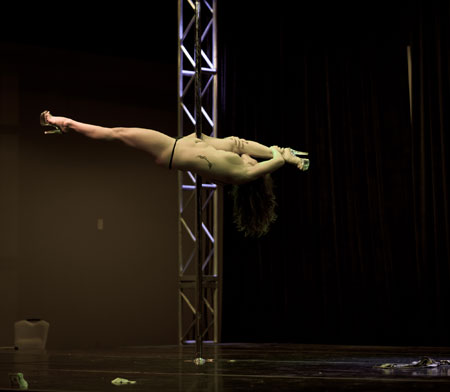 In terms of feedback, Annemarie has not personally received any criticism or negativity towards her performance, however she knows that there is some out there. She knows of some people gossiping behind her back, as well as statuses on social media that are directly about her without mentioning her name (we have all experienced this!). Pole Dance Community ourselves have received negative complaints about the performance, however I will not repeat them here as they are unnecessary. If some people are offended by seeing a pair of breasts on stage, or if they do not think it necessarily ties in with pole dancing as an 'art form', then they should simply turn the video off.


The routine itself is sexy, and put together with such artistry that many pole dancers can only dream of achieving. It is in my personal opinion that Davies' routine will help many pole dancers, and general women alike find their inner confidence 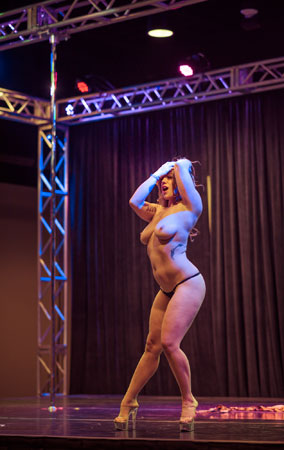 and beauty. Some people may never feel as confident as she, however they may feel empowered to get on stage and do their own thing, regardless of what others may think and believe. Davies believes that people 'just don't like some things', which is why they may disapprove of her performance, as well as people wishing to separate pole dancing from its sexual roots.


Pole dancing is an art form, and Annemarie's Pole Con routine reflected this vision wonderfully. Yes, it was more linked to stripping and sexy pole dance rather than the fitness side, but this should not take from the sheer artistry it took to put the routine together. Davies is a confident woman who loves her body and her breasts, and is somebody that many women should look up to in terms of the way they perceive themselves. Too many women nowadays hate their own bodies, so I believe a woman who loves hers enough to celebrate it live on stage should be merited and not put down for doing something which comes naturally to her, and empowers others. The sexy roots of pole dancing will never be fully forgotten, as sexy is strong enough all on its own, and will not be torn down by the critics and sceptics.