How is your pole dancing club or society treated by its student union? 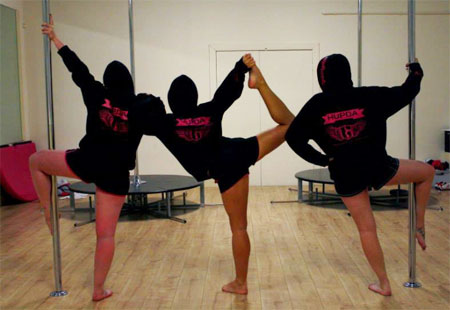 After the recent battle at Swansea University we are seeing many pole clubs and societies feeling neglected, discriminated against and underfunded by their respective student unions. If you have a story about your pole dancing experience at university please contact us. Here is the story of Huddersfield University Pole Dancing Academy told by their PDC Approved 3 star pole dancing instructor SJ Marcussen:

HUPDA, the Huddersfield University Pole Dancing Academy was launched in September 2012 by myself and 3 University students who were desperate to make Huddersfield the next successful University to promote Pole Fitness as a fun way of keeping fit, having fun and meeting new people whilst at University.

"HUPDA received £400 funding for the entire academic year, for a Society that has around 75 members"

In our first year the University were very supportive, we were granted a fantastic budget which meant we could take our Members to watch Showcases, Competitions, including ticket prices and coach travel. We hosted our own Charity Fundraiser, receiving positive local media coverage and raising money for both the Society and local charities. We were awarded enough money for 20 students to participate in Masterclasses hosted at our Studio with both Jamie Taylor and Donna Gant. We were also nominated for two SU Awards with President Eilis going on to win Society Personality of the Year.

However, as we go into our 4th academic year in September 2015, we are facing an uphill struggle. While the initial support was fantastic, since then we have been granted minimal funding and the support has waned. Our committee have been fighting a losing battle and we now feel it is time to escalate this further and air our concerns. 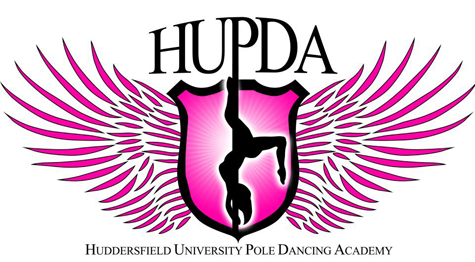 We are struggling to be accepted and funded as a Sport at the University, the funding this year has been pitiful and has meant we can't afford to fund the events we promised to our Members, as we had done in previous years. This year we were awarded just enough for 7 students to take a Masterclass with Bendy Kate, no funding was provided for tickets to support fellow students performing at the Pole 4 Purpose Showcase and just £85 for an 8 seater coach. In previous years we have been granted tickets and coach travel for 16 students to 2 or more events/competitions per year. So HUPDA was given £400 for term one, just £400 and nothing towards all the usual things a Sport would receive funding for. This is a gigantic drop in funding from previous years.

We formerly held fundraising Showcases at the University each year, but the Student Union building has been closed down, meaning we don't have a venue available to use. This year President Emily has had e-mails ignored when requesting help to find and fund an alternative venue so we can continue to host our Showcases. Even when individuals were CC’ed into e-mails by other members of staff, they continued to ignore our requests.

Showcase at the University SU – Performing Cinderella in 8 mins on the poles! - pictured below left.

We receive no funding for equipment or Instructor fees, so while the Studio HUPA train at offers a discounted rate for HUPDA, this means our students have to pay a weekly fee to train, without these being subsidised by the University. In a long and seemly positive meeting this year we were asked to write down all costs for consideration for funding in Term 2. We requested funding for a Masterclass with Emma Haslam and detailed our lesson costs, cost of Dry Hands grip etc. We felt confident that as we had provided so much information and clear reasons behind our requests we stood a chance of having at least some of our

requests funded. The e-mail came back, and we were granted a grand total of £0.00. This was incredibly frustrating as we spent a lot of time and energy chasing for a meeting, preparing for and attending said meeting and then applying for the funding. This means HUPDA received £400 funding for the entire academic year, for a Society that has around 75 members, is active competitively and is seeking to progress and thrive. This combined with the lack of support in helping us to compete, or fundraise through our Showcases has left us feeling very disheartened and dreading the ratification process for 2015/16.

We were advised to take more money from Members when they sign up to subsidise classes. This is completely pointless, as the Members pay a fee to join the Society then pay for weekly lessons anyway, so the money would still be spent the same way only Members would have to find a large initial sum of money to be able to join. HUPDA were also advised to find a cheaper Studio/Instructor in the area, completely disregarding the fact that HUPDA wish to train with a qualified, Insured Instructor at a dedicated pole studio, which is set up specifically for pole and PDC Approved. Finding a cheaper option would basically mean accepting less than the best for the Society, and how is that a helpful suggestion or solution for the problem? You wouldn’t ask anyone else to train with someone under qualified or at an unsuitable venue and expect them to succeed, especially at a competitive level.


Original President Eilis who won Society Personality of the Year - pictured below right.

Two of our Students competed at the Derby Inter-University Crown of the Chrome Competition, and we were not granted any funding to provide a uniform/kit for the ladies to attend the competition in, or towards their costumes (only the same as a gymnast would receive funding for a tracksuit and leotard) We 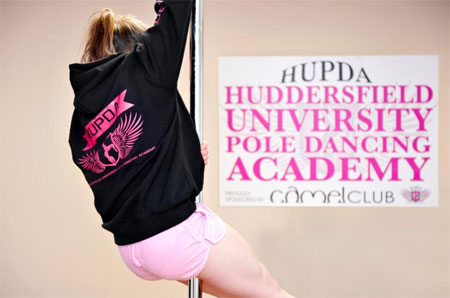 were denied funding for tickets and coach transport to take other Members down to Derby to support the competitors. The irony of this is that the University said we couldn’t be recognised as a Sport as we were not competing. When we changed this by competing they gave us no support. HUPDA student Amy Cardus placed 2nd in Beginners at her first ever competition, which I feel shows we are serious about representing HUPDA competitively and that we want to progress as a Sport. Any other Sport would receive equipment, safety equipment, matching kit or uniform to professionally represent the University and transportation to Away games or competitive events. In a further shun, at the SU Awards this year a list of all Students and Societies/Sports to have competed on behalf of Huddersfield University (whether they placed or not) was shown and discussed during the Ceremony. Neither HUPDA nor Amy were listed or acknowledged/congratulated, despite having placed 2nd in a National Inter-Uni Competition.

We were also told that as we are not recognised by BUCS we cannot be accepted as a Sport rather than a Society. We were told that because we have no Governing Body, it isn’t an option. However I know that within the UK other Universities are recognising Pole as a Sport (REF - Plymouth University have sports club status but still receive no funding) and funding it as such, providing money for poles, crash mats etc. We have explained that we follow the strict guidelines of the PDC, and also directed them to the International Pole Sports Federation (IPSF) to show that there are standards and judging criteria in place for Pole. This has fallen on deaf ears here at Huddersfield University.

We want HUPDA to grow, we want to share the fun and excitement of Pole with as many Huddersfield University Students as possible, and offer them a safe place to train, the best equipment and opportunities and the best level of Instruction, both from our regular Instructor and with Guest Instructors from around the World. But without the recognition and funding we feel we deserve, this dream cannot become a reality.