Sophie Rebel, at just 16 years old is currently the youngest Pole Dance Community approved instructor. Starting pole dancing at the young age of 12, Sophie never questioned why it was so exhausting and trained hard without complaint because she loved the sport. As a sporty person, Sophie had been involved with martial arts since she was 5 years old, and had started hip hop just a year earlier than pole dance and so she understood that training meant work, which is something many older pole dancers still do not fully realise.


Taught by her mother, Nadine as her first ever student, Sophie progressed quickly as she shared a special bond with her instructor. Nadine states that "99% of the time, she has been great - otherwise she would not be at the point of development she is now", and that the two  have forged a stronger bond than ever before. Nadine has loved watching Sophie develop into a young woman, and Sophie feels that pole dancing makes her mother younger in her eyes, as she is "no longer being a typical mum". It appears as though pole dancing makes Nadine a happier, more humorous person, and that it has changed her as a mother in Sophie's eyes. "She is much cooler now, I think!"

Nadine started pole dancing after watching a video of the sport on YouTube, as she saw the strength and beauty in the art form and knew that she needed to try it out. "Strength and beauty no longer seemed like two different things within this sport", which is a beautiful summary of how many of us see pole dancing, I believe. Nadine believes that parents should allow their children to try any form of dance that they like, and that pole dancing is no more sensual than any other form of dance, since "dancing has always been a sensual way of letting the body speak". She will not keep body waves, hip shaking and cobras out of her lesson

plan because there is a younger girl in the class; if they are in the right stage of development, the movement will come naturally, if not these moves will not fit the dancer. In short, a girl would not put a body wave into her routine if she could not do it effortlessly and if it did not fit her stage of development.


Nadine does not allow girls under 18 into her classes unless they have parental consent, which has often led to girls crying down the phone begging her to let them start privately, which of course she cannot do. In this sense, the parents should recognise that it will only build their child's confidence and make dance easier for them in general.


However, it has not been all sunshine and roses for the young pole dancer, and Sophie has faced crude comments and insinuations just like the rest of us. Her classmates jokingly asked if she was training to become a stripper, so Sophie would refuse to talk about it to them in the beginning. Now, it is the other way around and they are begging for her to teach them for free, which of course she refuses to do. Since she started performing, Sophie has found that people are amazed by what she can do, or they try to compare it to gymnastics and say that it is not difficult at all, however they are probably just jealous. Sophie's boyfriend and best friend have both tried the sport out, which she said was fun and interesting, and that she would love to dance with her best friend, Carina more often since they used to do martial arts and hip hop together.


On the plus side, Sophie has said that she has learnt to dance with her whole body, which is a very difficult skill! She has also had to deal with many challenges and bruises, just like the rest of us, these challenges including doing something so far from the mainstream. She has enjoyed finding her own style and dancing to her music, which is fun and empowering. She has acquired the confidence to talk to new people, and finds it a lot easier speaking publicly at the studio than in school. Alongside this accomplishment, Sophie is also a youth trainer in martial arts, which as well as pole dancing has shrunk the distance between the development of her body and her mind; it has made her much more self confident. 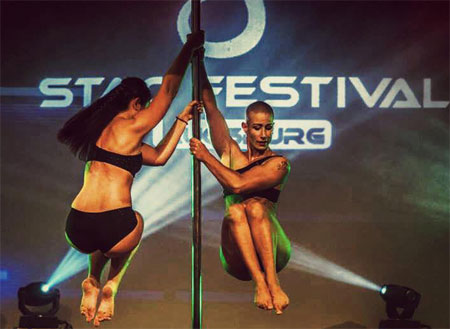 As well as being the youngest PDC approved instructor, Sophie also has performed and competed in pole dance. Her first competition was the 2012 Bavarian Pole Championship, where she competed as an amateur, and her mother as a professional. She has also competed at the STAC Festival last year (see picture left) as a group with her mother and a handful of students, the best part being that they won!


Although she loves working towards competitions and having these goals, the restrictions of some competitions often hold Sophie back from competing, as she does not like being told what music to dance to and what to wear. She believes that Pole Theatre and the Crazy Gala Pole Cup are two of the better competitions, which allow more freedom in how she can express herself. Sophie hopes that once she has completed secondary school and is less busy, that she will be able to compete more with her exams out of the way, which she still holds high in importance.


If you have an story about an inspiring pole dancer and would like to be featured in this series just e-mail us and we'll get our features writer to contact you.