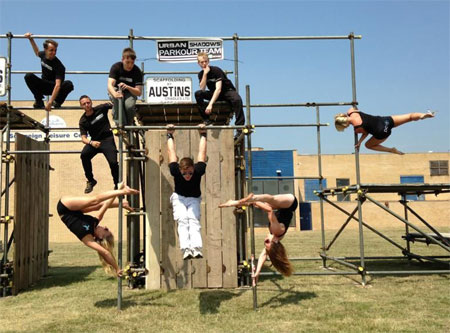 Over the weekend of 13th and 14th July, Pole Performance’s instructors and some of their students attended Eastbourne Extreme to promote Pole Fitness. The biggest free sports festival in the UK took place along Eastbourne seafront with 25,000 people attending. We set up our X-stage and aimed to change people’s views and broaden minds about what Pole Fitness is all about.

We demonstrated skills from basic moves to advanced tricks over the two days and had a great response from the crowd, with very positive feedback. We generated a lot of interest from local businesses, and were pleased that a local bootcamp approached us asking to run some classes with us. We also got to jam with the Parkour team, who were demonstrating next to us. 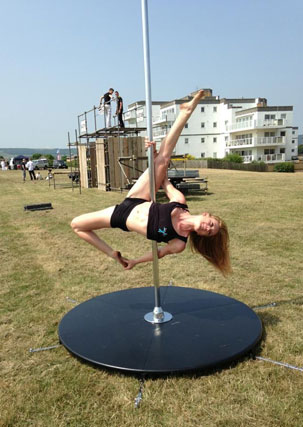 Pole Performance was started up by Holly Gibbons in 2008. Holly, who has 9 years experience in the pole industry and is a 4 star approved PDC instructor, is a full time instructor and has taught over 1000 students. She and her instructors run Pole Fitness classes throughout Sussex including Eastbourne, Falmer, Crowborough, Steyning and Henfield, and also run the Pole Society at University of Brighton.


Two other Pole Performance instructors also performed during Extreme weekend, namely Rhianne Eagelton and Louise Brown. Rhianne, who started Pole 4 years ago and began instructing August 2012, is a 3 star approved PDC instructor and is the most flexible in the Pole Performance team. Louise, who started Pole a year ago and has been instructing since May 2013, is relatively new to the industry with Eastbourne Extreme being her first public performance. She is naturally strong allowing her to swiftly progress through the levels - she now aims to enter competitions.

Picture below - From left to right Chloe Sims, Rhianne Eagelton, Holly Gibbons, Louise Brown, and Laura Evans. Just a few of the team at the beginning of Day 1.

Pole Performance received great support from their students on the day, with many demonstrating their skills at the event. These included Amy Mitcher, Chloe Sims, Corinn Govan, Barbara Sokolova, Alixe Kingsnorth-Paris, Maria Blincow, Sophie Sherley-Dale, Noriko Kawa, Victoria Hughes, Beckie Pritchard and Laura Evans. Each of the students brought their own unique style on the pole, with some having never performed before in front of an audience. It was great to see them overcome their nerves! Many of the other Pole Performance students also attended the event with their family and friends and showed us great support.

Picture below right - Chloe Sims - Pole Performance Student. Chloe found Pole a year and a half ago after having her little boy. She finds it's a great social and fantastic for toning.

In the future Pole Performance plans to attend and demonstrate Eastbourne Extreme annually. After seeing our performances, we were surprised by how many adults and children asked about how they could get involved. We hope to expand our team of instructors, and by the new year we hope to move into a large, fully equipped studio offering various pole and aerial skills classes which will be available to all age ranges.