Fawnia Mondey is firmly established as one of the world's most influential pole dancers and is a true industry pioneer. Fawnia was one of the first ever people to release a fitness based pole dancing DVD and she has been teaching pole dancing since 1994.

Fawnia runs her own studio, the Pole Fitness Studio, in Las Vegas, Nevada, US.

Fitness/Pole Qualifications:
F "I have been performing and teaching pole dancing since 1994. In 2003 I earned my personal trainers certification through BCRPA in British Columbia Canada. In 2012 I renewed my personal trainers certification, and in 2013 renewed my group fitness certification, both with AFAA in the United States.  I am also certified in PiYo, iKick and Zumba.
In 2005 I wrote the Pole Dance Instructor Certification (PDIC), and soon after the Booty Camp Instructors Certification (BCIC)
With my PDIC training program I have certified 60 studios in the United States plus studios in Canada, Mexico, France, Germany, Argentina, Venezuela, Costa Rica and Hong Kong."

Membership of Professional Bodies:
Directors for the Pole Fitness Association (PFA)
Olympic committee member for the International Pole Sports Federation (IPSF) as an Elite Athlete with efforts towards the 2020 Olympic games.
Member of the Pole Dance Community, a PDC Approved instructor and a PDC Pioneer.

Teaching History:
F"I began teaching pole dancing and floor work in Dec 1994. In 1998 I produced the world’s first instructional video on ‘how to pole dance,’ which was accessible to people across the globe. Since then I have produced seven instructional dance and fitness DVDs. I also offer pole dancing workshops at the University of Las Vegas (UNLV) and also give education lectures at UNLV's "Dance 103: Sex, Dance and Entertainment" class."

Student's pole dancing success:
F"I have help hundreds, if not thousands of women worldwide lose weight, build muscle, build self confidence and build a better life by introducing them to pole dancing as a form of fitness." 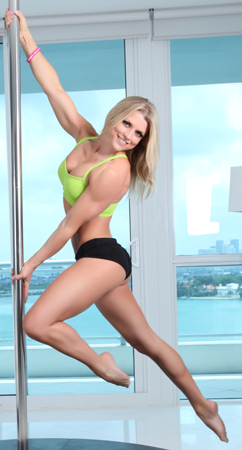 Professional Pole Appearances:
2011 and 2012 “Dance Wicked for a Week” Teaching and performing in Jamaica.

F "I organize the Pole Expo in Las Vegas annually, starting in 2012 for Strides Las Vegas (fighting breast cancer).
Since 2009 every spring and fall Pole Fitness Studio hosts a recital for our members and friends, proceeds benefits Strides Las Vegas.
Life with Love February 2010 for the American Lung Association through Kees Camp in Iowa." 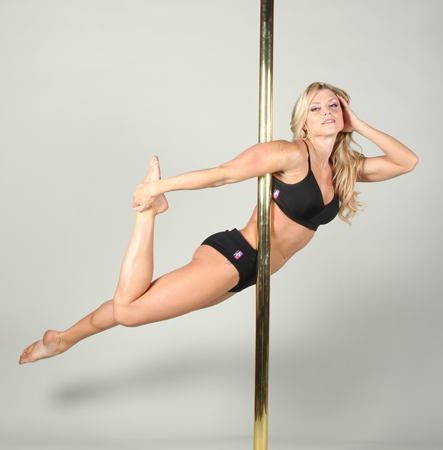 Pole Dancing Goals & Aspirations:
F "I am continuing my passion of sharing pole fitness with all those want to try.
Pole Expo in Las Vegas has been a wonderful experience to organize, and I plan on keeping it going annually every September. Moving Pole Sports into the 2020 Olympic Games."

The Pole Dance Community are proud to welcome Fawnia to our growing community and would like to thank her for inspiring so many pole dancers and for her continued contribution to the industry.