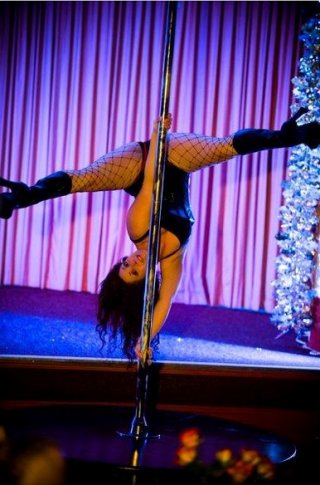 Dawn Roberts is the principal instructor and proprietor of Circadian Fitness in Swansea, Wales and probably the owner of one of the world's most stunning pole dance studios. Dawn received her 4 star references from Anna-Marie Fulbrook of BAD studios and Sonia Allcock from Learn Pole Dancing.

Anna-Marie Fulbrook - "Dawn Roberts is without doubt one of the most amazing pole instructors I have ever had the pleasure of working with. She is my best friend so I am a little biased but I know Dawn and if I felt that something she was teaching could be improved with a little constructive advice, she would listen, take the advice on board, try it out and then use what she felt would help her. And that's what makes her the best! Dawn doesn’t try to know it all, she isn’t interested in the being best but what is fundamental to Dawn is to teach her students through tried and practiced levels of progression. Her students are proof of her experience, fitness background, caring and motivational skills. Also she is a fantastic but naughty Pole Burlesque dancer and I adore her to bits."

Sonia Allcock "Dawn Roberts has to be one of the most knowledgeable and highly qualified Instructors in Wales!
Her classes are fun, and safe, and she makes sure every one of her students reaches their goals by using her extensive experience that is only gained by being such a Pole Professional.
Dawn has gone from strength to strength, her school now boasts an amazing new studio that will continue to be the best in the area. It is important that Dawn should be recognised as a Level 2 Instructor because she has the skills needed to continue to teach at a very high standard."

Check out Dawn's impressive Pole dancing and fitness CV as well as her rather beautiful studio pictured below right. 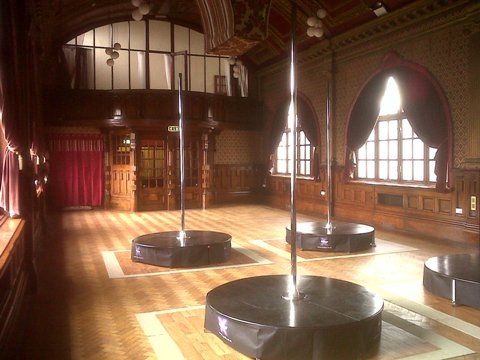 I began teaching as a Fitness Instructor in 2004 doing my own classes.
I began teaching Pole in late 2007.
I began running my own full time Pole Studio in May 2011.
Aside from pole I have also taught spin, kid fit, dancercise, aerobics 50+, pilates and may other classes.
I continue to work for Swansea Council as an Instructor, teaching both pole and 50+.

Several of my students now perform with me at local events under the banner Pole Pride Performers. We have performed at numerous events and work alongside local businesses which we support and promote, as well as raising money for our local hospice with charity work.

We also performed on stage with - Hangmen & Buffalo Summer, We have more work lined up with Hangmen this year.

We have also appeared on artwork for local band Red Room Therapy.

We are also invited to be guests on The Rock Show radio show on a regular basis and work closely with them.

I continue to learn through both workshops and research to keep my teaching fresh and stay aware of changing ideas in the fitness/pole industry.

I subscribe to Ultrafit Magazine
I attend Fitness Wales events if they are applicable to my work
I am on pole forums to keep abreast of pole industry
I attend pole workshops
I hold pole jams which are free for attendees
I check the PDC website regularly
I have been put forward by Swansea Council to gain the Level 4 GP Referral qualification in the near future.

I far prefer showcases and performances to competitions! 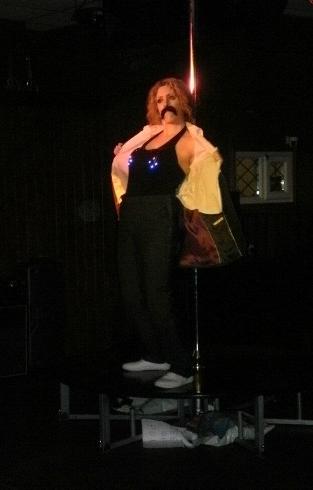 Many MANY more to come!

I am always giving away free pole classes worth £100 to local charity raffles as prizes. I have also performed at students charity nights.

I am currently working towards our first ever showcase. All the proceeds from the showcase will be given to Ty Olwen Trust, our local hospice. The showcase is due to take place on 12th May 2012 and is only open to friends and family of the school in order to give my students their first performance with a suitably supportive audience.

I have had a piece in Swansea Life magazine about my beautiful venue.

I aim to be the best, safest instructor that I can be and continue to provide fun classes for my amazing students.
Performance-wise, I just wish to attain what I physically can at this grand old age!

My performances are firmly classed as cabaret and polesque – I very often dress as a man with a big moustache! (see picture above left) I love surprising the audience because they assume they will get a certain act when they see pole dance advertised and are usually totally confused when I step out dressed as Supabad Cop! My acts are usually comedy pieces.

A huge congratulations to Dawn Roberts on her 4 star success, Dawn is a great ambassador for the pole dancing industry and an inspiration to many.