Off the Floor - The rise of contemporary pole dance. 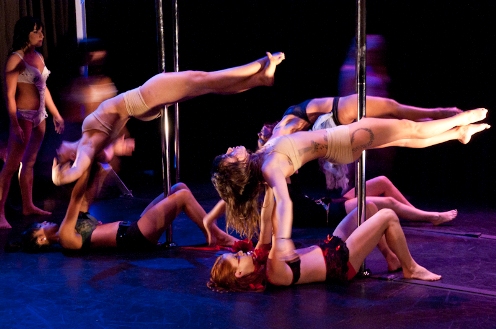 Off the Floor: The Rise of Contemporary Pole Dance is the story of Jagged, a contemporary pole dance company based in LA, California. Jagged combine pole work with traditional and contemporary dance techniques. designed to challenges audiences to dispel the negative stereotypes they may have about the beautiful art of pole dancing. Jagged is lead by the Jessica Anderson-Gwin and Sarah Mann, the troupe incorporates pole dancers of varying levels and abilities. Jagged saw some success on MTV’s America’s Best Dance Crew, the ladies of Jagged never to cease to be anything but skilled, graceful and visionary but they still faced criticism from some of the judges for their chosen art form.

Film makers Matt and Katie Celia have been touched by the story of Jagged and the problems that today's pole dancers are faced with, they are determined to hep educate more of society about the rise of contemporary pole dancing through sharing the talents of Jagged. We spoke to Matt and Celia to find out why they decided to produce this documentary and what there aims are for the future. Firstly check out their taster video:

Can you tell us a bit about what made you decide to make this documentary?

Katie: We were so lucky to be in the right place at the right time. We were invited to Jagged’s first pole show in Los Angeles and were just floored. Afterwards, both of us just turned to each other and knew this was something that the world needed to know about. We’ve been following them around with a camera pretty much ever since.

Matt: Both of us were looking for something to pour our creative energy into and were really struggling to find something fresh and interesting. Jagged had that perfect mix. 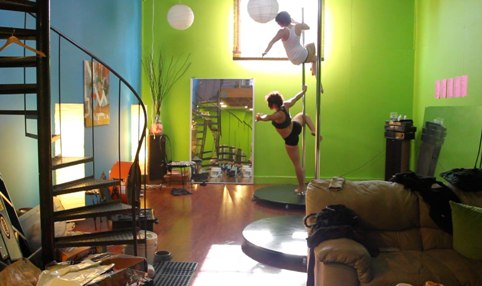 Katie: One of our close friends was in their pre-show and we had her introduce us to Jessica Anderson-Gwin (the founder of Jagged) that very night. We laugh now about how Jess thought we’d never go through with a full documentary, but here we are ...... nearly.

Matt: I met up with Jess a few days after the show at a pizza place and pitched her my idea for the documentary.  I’m pretty sure she thought I was crazy, but she was into it.  I remember that she was really adamant about paying for her slice of pizza ($2.50), but I wouldn’t let her since I just heard her rant about how broke she was because she was pouring every cent she had into Jagged.  I think her investment paid off.  And that slice of pizza was a pretty good investment on my end too.

Have either of you pole danced before?

Katie: I’d been to a bachelorette party before where we took a pole dance class, but other than that one hour before no. Jagged has inspired me in so many ways, the most obvious one being the pole now located in our living room. After watching them day in and day out for months on end, I was just itching to learn. Now I’m a pole dancer too!

Matt: I haven’t, but I am always fascinated by it.  Katie gets upset since I’ve seen some pretty amazing moves so when she learns a new one I don’t always have that same “I’ve never seen that before” reaction.
Katie: You’d think your husband would be a little more excited when you’re holding yourself upside down by your knees. Just saying!

What do you hope your documentary can help to achieve?

Matt: It’s amazing to me how most people can’t get over the pole on the stage.  Other forms of dance that are well established and respected are equally sensual and evocative, but they don’t have to fight for acceptance as an art form.  We want that social stigma to change and I think that the work that Jagged does is the perfect example of artistry and expression needed to do it.

Katie: We really hope the documentary opens hearts and minds to the art of pole and gets audiences to rethink what it means to be a pole dancer. What the ladies of JAGGED do is truly extraordinary and we really believe the film will help audiences see that.

Do you think some people will remain close minded even with the facts laid out in front of them?

Katie: We know from the judges reactions on America’s Best Dance Crew that’s a possibility. But we really believe that after watching the film it would be hard for audiences not to be able to appreciate pole dancing a little more.

Matt: We’re going to try our best in the film to show people something different and leave the audience with something other than what they expected.  It’s not easy to do and is a discussion we have amongst ourselves daily.

Do you think we should rename pole dancing?

Matt: That’s a funny question I don’t think we’ve been asked before! You know, I feel like the community shouldn’t have to, but people do get really caught up on names and prejudice and I know that if we told people we were doing a film about “modern vertical ballet” the reaction would be completely different.
Katie: We often refer to Jagged’s style of pole dancing as “contemporary pole dancing” and that definitely gets people to be more open minded, but I think it’d be hard to call it anything else at the end of the day.

Why do you think pole dancing is still regarded as so sexual when belly dancing and salsa are so accepted?

Matt: I think it goes back to the pole being associated with strip clubs. I think also that pole dancing is evolving as an art form and we’ve seen a change in the style of performances over the last few years.  Now we see more aerial tricks and choreography. As the performances evolve I think we’ll see the stereotypes come down. People’s perception will change the more they are exposed to it as well.  I learned that the Waltz was controversial in the 18th century because it was deemed too sexual. So you get the idea.

Katie: It takes a long time to change stereotypes, and the stereotype (right or wrong) in the general public's mind when it comes to pole dancing is that it’s sexual. One of the reasons we were so drawn to Jagged was that they really challenged that. Like all dance, their style is sensual but not sexual. Nearly everyone who sees them tells us that, so really it’s just a matter of continuing to put it out there.

Do you think it is right for kids to learn to pole dance?

Katie: Not being parents yet I don’t know if we’re qualified to answer! However we do have a pole in our living room so we know it’s a question we’ll have to personally tackle. I think if we had kids who said “I want to do what Jagged does” it’d be hard to not let them do it. We’re pretty supportive people.

Matt: I think parents should be supportive of any dream that makes their kids happy.  If kids want to pole dance (which you need to remind people does not have to be sexual or involve stripping) then I think that’s great. It’s a great workout, it’s fun, and it isn’t like pole dancing is going to turn them into an evil human being.

Katie: Agreed, we’ve seen only very positive transformations of people who have learned to pole dance. The challenge is again changing the negative stereotype.

What are your views on pole dancing in heels/underwear?

Katie: Having been around Jagged, we mostly see pole outfits that match the piece being performed. Sometimes that’s wearing heels and a bra, other times it’s being barefoot with a tank top. Obviously because of the physics of pole, there’s always going to be bare skin, but what’s so much fun to see right now is how the pole community is getting more and more creative and thinking outside the box when it comes to what to wear. We’ve been lucky to see a lot of Kelly Maglia’s work when she did a co-production with Jagged. Her pieces are so beautiful and theatrical, it just adds another dimension to the dancing. For us that’s most important, that outfits enhance rather than distract from the routine.

Matt: Yes, I think that the dance is a performance and like any other performance, wardrobe plays a huge part.  Some of the best performances I’ve seen from SuzieQ Williams, Kelly Maglia, Mina Mortezaie and Jagged made amazing use of costumes that added to their dance.

A massive thank you to Matt and Celia for taking the time to talk to us. If you would like to help them with their project to raise £10,000 to fund the full documentary just visit the Off the Floor pledge page - they have £7,000 of their target already. Let's help make this dream a reality.