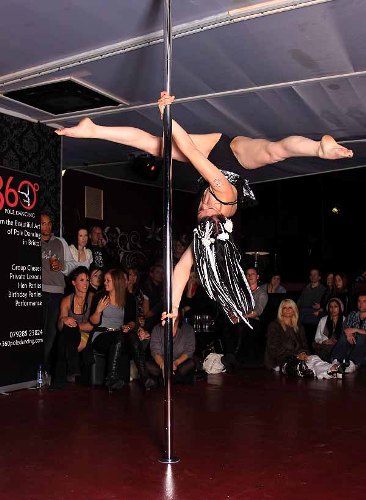 Anna Marie said "I would like to put forward a reference for Emily Smith’s Instructor Level 2 Status.  I have known Emily for over 2 years and have spent a lot of hours poling with her on a professional capacity, instructor sessions and fun times.

She is an inspiring and motivational character; her attention to instructing is precise, patient and realistic, safe and fitness based so very effective.  Emily has also put together some amazing shows for her students to demonstrate their achievements and skills, thus a fantastic Pole Performer.

Jessica Hofgartner Griffis said "I am more than happy to give a reference for Emily as I find her a real inspiration. Emily has a very supportive method of teaching and makes sure that every little achievement is celebrated, so her student’s feel their efforts are worth while. Emily’s Pole Fitness students are lucky that she is willing to put on regular showcases for them to perform at as it’s something positive for them to work towards and show each other support for. Not only have I attended one of her “spinny” workshops but we have also “jammed” with Emily. She is fearful of trying out new moves but doesn’t come across as intimidating to watch and show others her ability. I think it’s a fantastic method of teaching for Emily to teach her students spinning pole right from beginner’s level as it’s a strong discipline and can often be harder to grasp once your set in your pole ways! I am glad to have found Emily and will be aiming to pole with her lots more in the future! 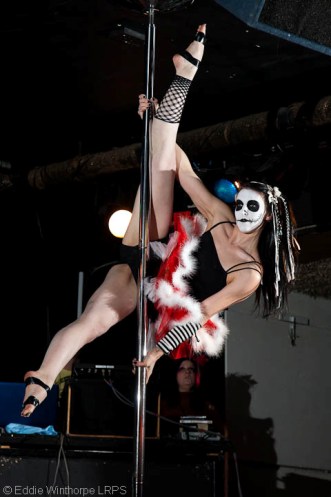 •    I have successfully set up my own pole school and have a studio based in Cheney Manor Industrial Estate in Swindon. I started in a pub function room, after 10 weeks moved to the studio I am in at the moment and am now moving to a new larger studio which will have 8 poles in total.
•    I teach pole dance lessons for fitness which consist of a fun dance/aerobic warm up followed by pole work including spins, transitions and tricks depending on how advanced the student is and then finishing with a cool down consisting of stretches and toning exercises.
•    At the moment I have roughly 60 students who attend my classes per week.
•    Lesson plans are written by me to keep my lessons fun and fresh so students are always learning new skills. I have also designed Progress Books for students to keep and have a personal record of moves they can do and work towards.
•    As I am a PDC (Pole Dance Community) approved school I offer gradings through the AAP (Advancement and Accreditation Program) which is a universal pole dancer grading program.
•    I plan and arrange events for my students to perform in to show friends, family and the public what pole dancing for fitness is all about.
•    As the director of this company, I do all the necessary paperwork which comes with running a business, including; tax returns, expenses, banking and accounts etc.

•    I have been self employed throughout this time teaching pole dancing for fitness as a part time activity, I taught for Pole Fun in Greenbridge, Swindon which no longer exists – Pole Fun was an organisation I co-founded but needed to move on to work for myself. 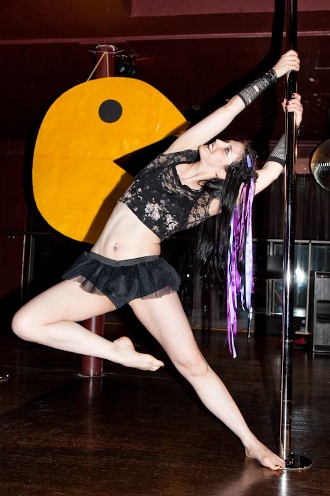 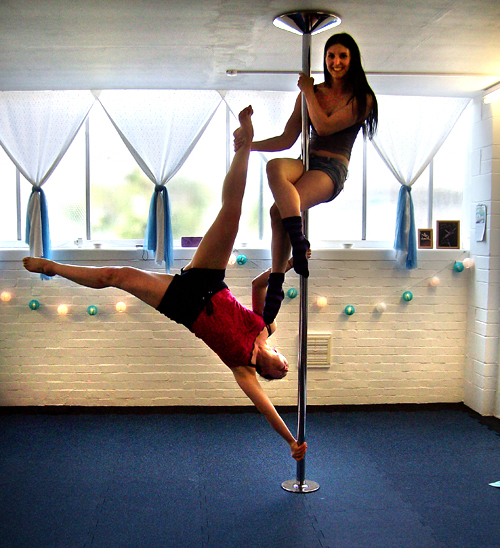 I am a member of the AAP and have successfully completed my Level 1, 2 and 5 gradings. I attended the first syllabus filming day with the PDC and am featured on the PDC Syllabus CD-ROM - June 2011. 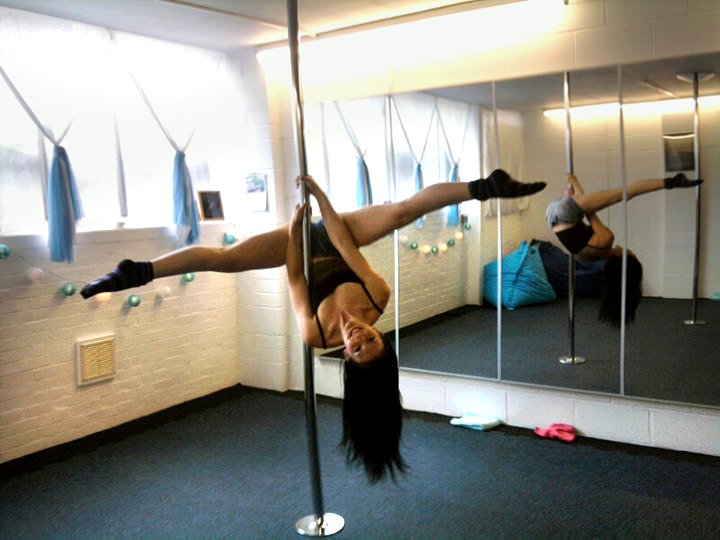 Apart from attending Master-Classes on a regular basis and setting up Shows and Pole Jams, I attend other Pole Jams all over the UK. I learn a lot from different pole dancers when I attend Pole Jams and think they are an excellent way to learn new skills and keep up personal training.

I have a very unique teaching style when it comes to spinny pole and this was recognised by Anna-Marie Fullbrooke from Berkshire Alternative Dance. I break spinny moves down to complete beginner level, taking everything I have learnt on static pole and incorporating it to spinny pole, taking it step by step to build up your strength and link spinny moves together. I taught a couple of Spinny Workshops in Anna’s studio and they were a big hit! I am going to look into holding more workshops in the future. 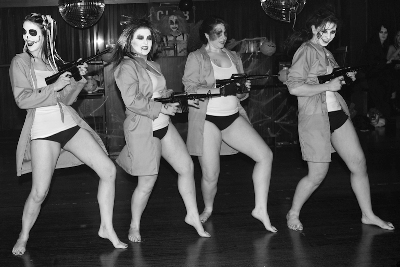 Suzy Simms - Performed in my Halloween Show and she also performed in my 80s Show. She has also successfully completed her AAP Level 1 Grading. Suzy has gained a lot more confidence since starting lessons with me and has entered her first competition this year into the advanced category in UKAPP.

Vicky Boyd - Performed in my Halloween Show in the group performance and did an individual act, she also performed in my 80s Show.

Leah Hewlett - Performed in my Halloween Show in the group performance and did an individual act, she also performed in my 80s Show. Leah has also successfully completed her AAP Level 1 Grading.

Stacey Thomas – Performed in the promotional performance in the Mail Coach, Students’ First Show, Halloween Show as part of a double act with Fliss Lynch and in the group performance, she also performed in my 80s Show. Stacey now feels confident enough to enter competitions and has entered UKAPP at performer level and also the doubles category with Fliss Lynch. 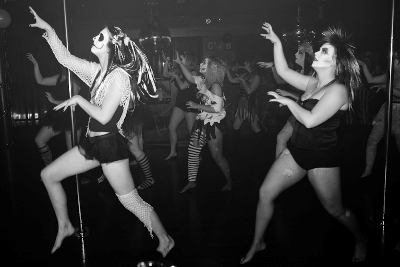 Jess Moore - Performed in my Halloween Show in the opening group performance. Jess also performed in my 80s Show as part of a double act with Shona Penny.

Hayley Webb - Performed in my 80s Show and has also successfully completed her AAP Level 1 Grading.

Claire Park - Performed in my Halloween Show in the opening group performance and did an individual act, she also performed in my 80s Show.

Tiff Collins - Performed in the promotional performance in the Mail Coach 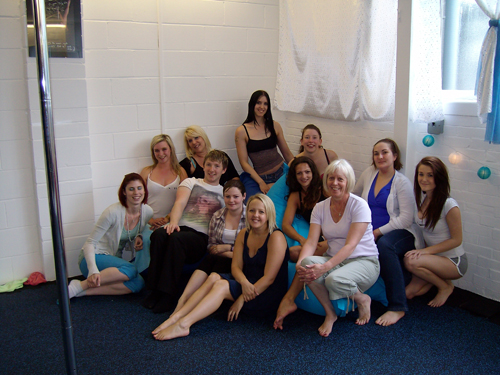 Claire Jefferies - Performed in my Halloween Show in the group performance and did an individual act.

Jade Bailey - Performed in my Halloween Show in the group performance and did an individual act.

Sarahjane Smith - Performed in my Halloween Show in the group performance and did an individual act.

Natasha Williams - Performed in my Halloween Show in the group performance.

Jo Phelan - Performed in the Students’ First Show as part of a double act with Linzi Bird.

Linzi Bird - Performed in the Students’ First Show as part of a double act with Jo Phelan.

Georgie Hunt - Performed in the Students’ First Show. Georgie also teaches as an instructor with The House of Pole.

Shelly Neave - Performed in the Students’ First Show and now runs her own pole school, The House of Pole which is PDC approved. Shelly had a few lessons with me and has trained in a few pole schools.

Aerial Hoop Classes - I have started attending aerial hoop classes with Alexandra Hofgartner at Spin City in Bristol and will be looking into teaching aerial hoop in the future.

Poi Workshops - Poi (a performing art of the Maori people) is another fitness and dance exercise I enjoy, I have taught a couple of Poi workshops over the past 2 years for charity at The National Conference for Cancer Self Help Groups, my workshops are popular and I will be doing them as often as I can.

Other fitness experience includes attending fitness classes such as aerobics, pulse, pump, yoga and my favourite combat. I also attended a cheer-leading workshop with Caroline Oliver in November 2008. Before I discovered pole dancing for fitness, I attended jazz classes for 2 years. 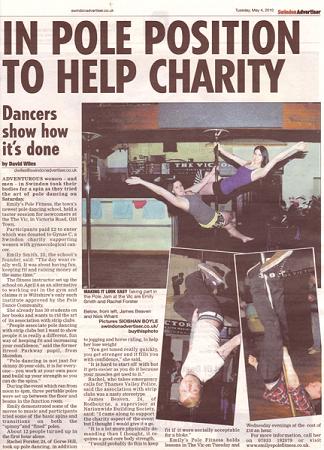 Race for Life – 22/05/2011
As a group, a couple of my students and I took part in the Race for Life and raised in total around £1000 (still waiting for the actual figure once all money is collected). This includes the money raised at my 80s Show and Easter Charity Pole Jam.

Easter Charity Pole Jam – 24/04/2011
This was an Easter special pole jam; I stuck mini chocolate eggs to the ceiling for pole dancers to race and get as many as they could and also made lots of cakes for this event. We raised £64.70; all proceeds went towards Cancer Research.

Charity Pole Jam – 01/05/2010
We raised a small amount for Gynae C which is a charity supporting women with gynaecological cancer. Gynae C was set up by Helen Jackson (my mother) who works extremely hard managing this charity single handed.

I am very passionate about teaching pole, I used to be so insecure and shy and pole changed my life! This is why I teach pole today, I want to pass on this fantastic feeling to everyone! I am in the process of setting up my new studio which will have 8 poles in total and the facilities to teach aerial hoop classes once I am ready. Once the new studio is set up I am going to complete the Vertical Dance Qualifications from Beginner to Advanced Level to add to my experience and knowledge which will improve my overall performance. I am always looking at ways to improve and there is always something new to learn no matter how experienced a person may be.

The Pole Dance Community would like to congratulate Emily on her successful Level 2 achievement, for giving the best to her students and for being a great role model for the fitness pole dancing industry.