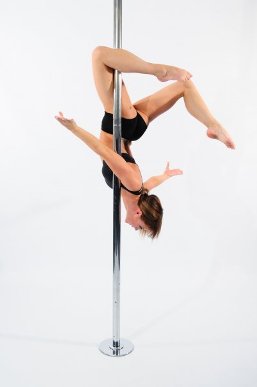 Amy received references for her 4 star application from PDC approved instructors From Jamie Taylor from Defy Gravity and Tracy Huckfield from Pagan's Pole. Jamie said "“Amy is a conscientious instructor, constantly finding ways to improve her classes and make her students happy. Amy is never stuck her ways and is always up to date on new techniques that will make classes better for her students, unafraid to ask anyone she can for their opinion. A confident instructor with a strong passion for everything Pole, which anyone would be lucky to have as their teacher. “

Tracy said "I would like to recommend Amy Butterworth (Candy & Chrome) as a PDC 4 star Instructor.  Amy demonstrates professionalism in all her mannerisms, and this is seen by both students and instructors alike.  Amy is setting an excellent example within the pole industry in promoting our sport and supporting the pole community, and I am confident that she will continue to do so."

Amy Butterworth of Candy & Chrome Pole Dancing started her pole career in early 2006, she says, …"I remember the very day vividly because I was literally just dragged along by my friend to try pole dancing as a random and unique way of cheering her up for being dumped!  It was a taster day with a company called Polecatz, and Harmony Pixie Rose was my teacher".

After that day, Amy became addicted to pole and within a week bought her first X-Pole which took pride of place in the living room, and she sought out more lessons through Harmony Rose. Amy trained as a student under Harmony Rose until she reached advanced level, because she was ‘a natural’ as her teacher put it, it didn’t take long before she became an advanced student, which was the highest standard offered at the time.  Harmony then moved to a different part of the country and Amy was left teacher less, and so decided to become the teacher and taught only friends and family for a short time, whilst joining various pole dancing forums in order to listen to and learn from the then professionals.

"Once my teacher left I started work on becoming more ‘self taught’ and learned via pole dance DVD’s, YouTubes, other students I had become friends with, jams with them, and constant practise at home and with friends. I joined forums just to learn whatever I could from EVERYONE as my training options past the point I was at were NIL.  I listened and learned online for a whole year before I felt brave enough to make a single post". 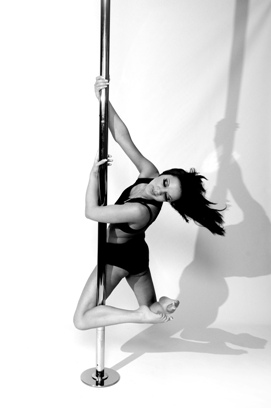 "Spending a year or so listening and learning from teachers and other professionals on the forums gave me great insight into the industry and helped me come to decisions about how I should go about becoming the best pole dance teacher I could be.  I was gaining from their experience and absorbing it – there was no way I was going to just set up overnight right there and then with no experience, qualifications or background, but at the time, there simply wasn’t any form of progression available to me to become an instructor".

So Amy then went on to study for the closest currently available course of education which represented some form of relevant qualification, and achieved the ‘Exercise to Music Instructor Level’ qualification. She also completed her first aid course, purchased public liability insurance, an extra pole dance teacher add-on policy, a PPL license, became a FIT PRO member, an FSB member and registered herself with REP’s before setting up business.

Candy & Chrome was established in 2007, as only the second pole dance school in North Wales, Wirral & Chester area, with just one little venue in a ladies only gym. ‘Going back to college as an older student, on my own, to study human anatomy and the effects of exercise on the human body was NOT easy!  I worked hard for my ETM Instructor qualification and recognise and respect anyone else who has done the same for their profession, which is why I joined the PDC!’.

Once the company was established, Candy & Chrome was featured in local media numerous times with open days and charity events that were hosted in order to encourage more ladies in the area to try pole dance and hopefully change people’s perspectives about pole to elevate it as a sport that any and all women can do. 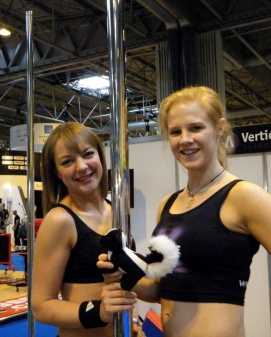 Amy then turned her efforts to combine her experience with other specialist media and accepted a job as co-editor of the of a global pole dance magazine for a short time, and in that time was able to finally further her training through master classes which she doubled up with an interview, with some of pole’s greatest dancers such as Pantera and Jamilla DeVille. Amy then moved on to focus more on expanding her business, so Candy & Chrome then grew to 3 venues which is enough to keep any one instructor busy!

"‘Working for yourself is tough but most especially when you run a company single handedly.  I am the boss, the admin, payroll, receptionist, instructor, the sick and holiday cover, cleaner, flyer distributor, web designer, campaigns manager, publicist, advertiser, customer services department, book keeper, and dog’s body for my company! There’s no-one else involved, it’s all just me, so personal pole progression is slow, any achievement no matter how small is a big deal, and time-off does not exist"

With the dramatic growth she felt inspired to enter in the ‘Flintshire Business Awards’ in 2009 and was nominated by the local council and it’s partners as a finalist for not one, but three categories:  Innovation, Young Entrepreneur of the year and Flintshire Business Woman of the year, the first school in North Wales & the North West to have gained recognition for any local or regional business awards! 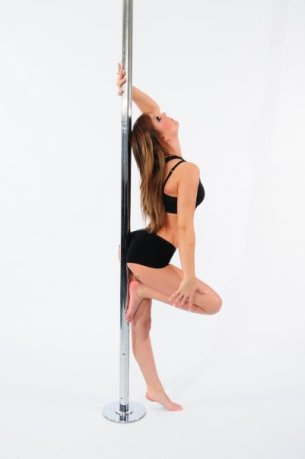 To further her pole standard, she decided it was time to host a jam and organised a Welsh pole jam along with another local school, with great success.  Participating schools/teachers include PDC approved instructors Anna from BAD Studios, Jamie Taylor from Defy Gravity, along with other pole schools across Wales.

In that same year, Candy & Chrome also released more articles which were published on the PDC website, Pole Essentials website, Women’s Thoughts website, and again was featured more regularly in the local papers.  Amy also released some high profile pole dancer interviews which she had collected from jams and master classes with Felix Cane, Suzi Q, Sally Ann Giles, Annie Norris, Katie Coates and Alethea Austin, some of which were obtained whilst attending the Leisure Industry Week event where she met and jammed with PDC approved instructor Robyn Rooke.

"I love to chat and interview the best pole dancers of our time.  I literally spend months researching that person’s history, preparing, and making sure I ask the questions that provoke the most inspiring answers…the kind of stuff you WON’T be able to find elsewhere on the net.  I find it invaluable to take in from their experience and expertise and draw from them knowledge.  It teaches me how to become a better instructor, a better dancer and inspires me to start thinking about getting out there and performing!  I’m not selfish though, I won’t keep it to myself, I want to share it with EVERYONE, but most especially….my girls!" 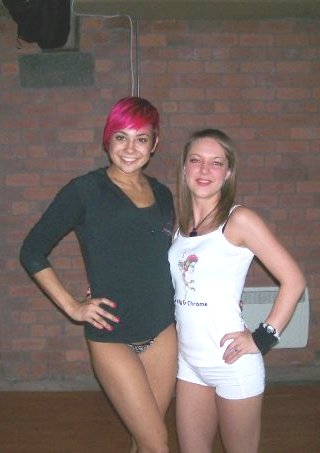 In 2010 Candy & Chrome became official sponsors of the (now) All Wales Pole competition, this was just before giving birth to her first child!  Amy then released a pole dance & pregnancy blog sharing her experiences of carrying whilst continuing to pole and teach which has given insight to numbers of pole-mums since.

Feeling the need to continue training and still progress after birth, Amy attended a master class with Becca Butcher (see picture below right), of course it was doubled up with an interview, and had more work published in regional magazine Yattar Yattar, and the Network She magazine.

"Ok I’ll admit, I thought I was super woman and would be able to carry on exactly as I was and progress and achieve but I tell you….becoming a new Mum AND still being my own boss is HARD!  Soooo much harder than I thought it would be!  I can’t do everything alone, I relied on everyone I could for help and so 2010 was a bit of a break and I had to put a lot of my pole plans on hold".

To date, Candy & Chrome was awarded the position of Finalist for the title ‘Young business woman of the year 2010’ with the Network She business awards, and for pole currently is a regular contributor for PDC approved magazine Indigo Dance. 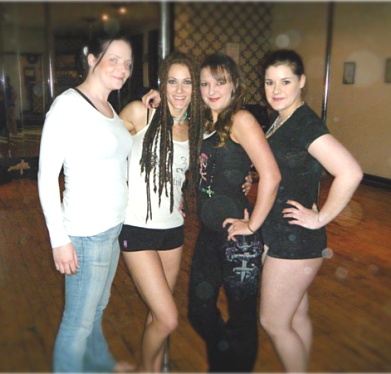 Amy is currently being interviewed on local radio station Heart FM and is working on diversifying her business into new areas of themed dance parties and workshops, with particular emphasis on less practised, forgotten forms of dance, to include:  Can-Can, Chair dancing, Flapper Dancing, Burlesque and a Pussy Cat Dolls theme.

‘This is my bigger project for 2011, I can’t wait to get them rolling and I think they will be popular.  I really hope to be able to inject some energy and fun back into these themes – it’s really me, good old fashioned, eccentric, energetic, glamorous and FUN!  As well as getting my body back and working towards some public performances I would LOVE to do a pole instructor specific qualification too and of course……THIS YEARS BUSINESS AWARDS!  It will be mine one day…oh yes’. 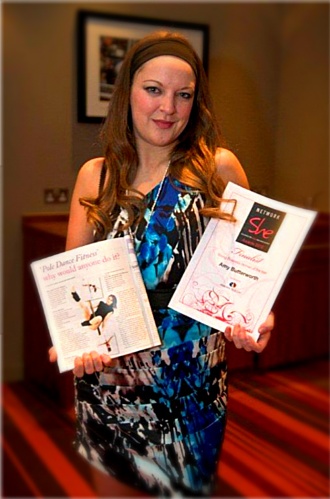 Carried her first child whilst continuing to teach and gave birth to a healthy girl!
Sponsored the All Wales Pole Championships
Had more work published in Network She Magazine

Congratulations to Amy Butterworth on sucessfully achieving 4 star status and for her continiung determination to get fitness pole dancing recognised in the media.