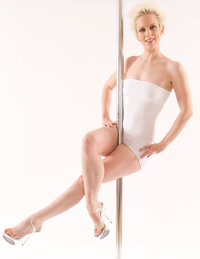 Robyn Rooke has been pole dancing since 2005. Her flair for pole dancing and instruction was recognised, and she was invited to complete the teacher-training course by her instructors at PoleCats. Robyn developed a love of performing after entering her first pole dancing competition in 2006.

Robyn is the founder of 360° Pole Dancing in Bristol where she teaches pole dancing and tricks to beginners right up to super advanced level. Robyn also runs the UK’s largest pole dancing competition, PoleDivas Championships with fellow promoter Fay Warne.

In addition to performing, judging and promoting Robyn has achieved success at competition level including her recent win at the Bristol Pole Championships 2010 where she attained the title of professional champion.  Other competition related achievements include: 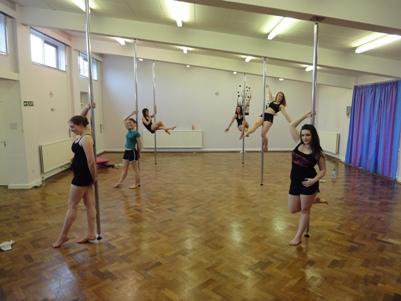 picture right of some of Robyn's students in her 360 pole dancing studio in Bristol.

Robyn has a vast experience of teaching including running 360 pole dancing in Bristol since 2009,  being the senior instructor for Pole Play from 2006 - 2009 and teaching for PoleCats in 2006.

In line with the PDC's policy on CPD Robyn has undertaken a PoleCats Teacher Training qualification in 2006 followed by a Future Fit exercise to music course in 2006. Robyn has attended private lessons with some of the world's most accomplished pole dancers; Fawnia Dietrich-Mondey, Pantera Blacksmith, Tracey Simmonds, Jamilla Deville, Jenyne Butterfly and Suzie Q.

Other factors that contribute towards Robyn's Level 2 PDC instructor status include her current First Aid Certificate for Sports Injury, and her equity membership.

The PDC would like to congratulate Robyn on her successful achievement of 4 star status and for being a great ambassador for the fitness pole dancing industry.