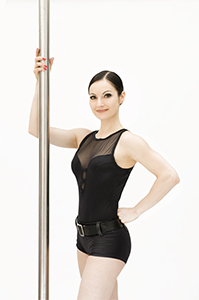 Elena developed her passion for pole dancing after using it as her way back to fitness following a serious car accident. As a pole dancer and choreographer, she combines the elegance of classical ballet with extreme flexibility and acrobatic pole work; a combination that has won her awards at both national and international level, culminating in being crowned Miss Pole Dance World in 2005.

She is also a certified Ishta yoga instructor, member of Equity (No. M00240415) and a Level 3 member of the Register of Exercise Professionals (No. R0043384). Elena trained at The National Ballet School of Canada where she was awarded 4 years' full-time scholarship. Graduating in 1995, she won the "Excellence in Dance" Oondatje Fountation Award, the Peter Dwyer Prize and the Ambrosoli Arts Foundation Scholarship and became a member of The National Ballet of Canada  under the direction of Reid Anderson and later, James Kudelka. In 1996 Elena won first prize at the Professional Young Dancers Competition in Pinerolo and Udine, Italy. Then, in 1998 she joined The Bavarian State Ballet in Germany under Czech director Ivan Liska.

Her repertory includes Swan Lake, The Sleeping Beauty, La Bayadere, The Nutcracker, Giselle, Don Quixote, Onegin, Manon, The Merry Widow, Romeo And Juliette, Coppelia, Paquita, La Fille Mal Gardee, Concerto Barocco, Episodes, Four Temperaments, Serenade, Theme And Variations, The Second Detail, Artifact 2, Washington Square, Les Sylphides, The Red Shoes, Elite Syncopations, Tales of the Arabian Nights: The Story of Abdallah, Terra Firma, Grand-Maître's Emma B, and Lady of the Camellias. In March 2000 Elena was involved in a serious car accident, which resulted in her retiring from the company and led to her discovery of pole dancing and the start of a more contemporary dance career following her full recovery. 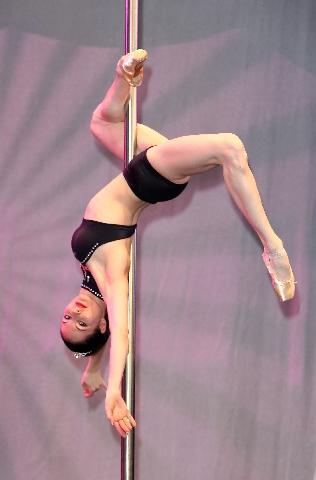 In 2003 Elena founded Girlesque, a glamorous, sassy and entertaining troupe, for which she choreographed and performed in London and throughout the UK. Then in January 2005 Elena travelled to New York City where she completed the Ishta Teacher Training Program founded by Yogiraj Alan Finger founder of Yoga Zone.

Elena's passion for pole dancing has won her national and international acclaim such as Miss Pole Dance UK, Best Entertainer award and crowned as Miss Pole Dance World in 2005. In January 2006 Elena founded Pole Dancing School, which by 2010 has grown to 5 venues including 2 dedicated pole studios.

Elena was appointed the UK representative of the International Pole Federation in 2006, founded by Jamilla Deville, an organization governed by a board made up of some the world's best pole dancers whose vision it is to uphold the ideal of pole dancing as an art form in itself, as well as to support the growth of the industry through maintaining quality and standards in classes, resources and events.

In September 2007 Elena was invited by Alexander Kolpin to join his Copenhagen International Ballet in their production of SommerBallet 07 as guest performer and co-choreographer for the world premiere piece Woman.

Film and Television credits include: feature dancer and choreographer for the 1940s film Gin & It directed and produced by Maria Micetich and Leila Gaabi, the instructional pole dancing DVD The Art of Pole Dancing Vol.1, dancer in the pop video The Space Cowboys, dancer and choreographer in director's show-reel Pole Our Eyes, directed and produced by Anna Heighway, finalist professional performer for the Netherlands TV series Beat The Best 2012, Feature on Elena Gibson on BBC Chanel 4, commissioned by Random Acts for 2013.