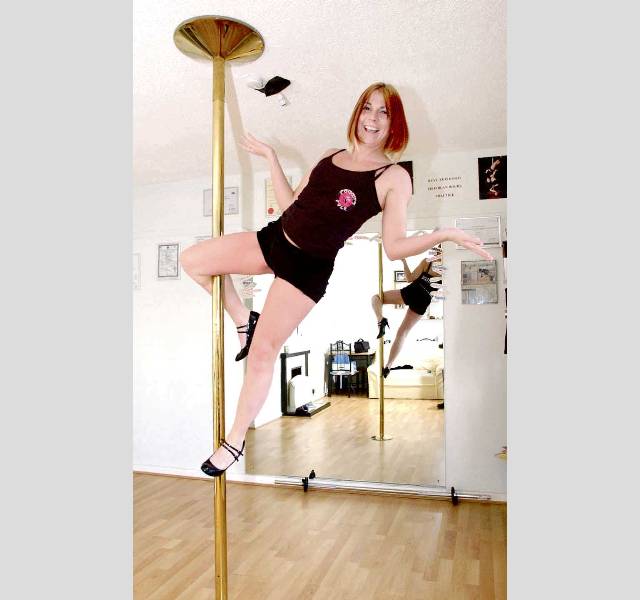 The Pole Dance Community team are proud to announce the first successful application for 4 star Instructor status. Tracy has worked hard to gain her 4 star status and her application was backed by 2 other PDC approved pole dance schools; BodyBarre in Manchester and Candy & Chrome in North Wales.

Tracy (pictured left demonstrating the Cupid and below right demonstrating the Allegra) has been pole dancing for many years having started as a student in 2007. In 2008 Tracy decided to undertake some continuing professional development so she successfully completed an Exercise to Music (ETM) course to further her fitness knowledge.

After completing her ETM Tracy felt ready to set up her own pole dancing school and Pagan's Pole was born. Tracy said "I found that mixing the pleasurable sides of pole dancing with the hard work was beneficial to all involved, so we started jamming regularly and arranged trips to different pole dancing competitions, shows, jams and studio openings."

To continue her professional development Tracy qualified as a Pump FX instructor giving her excellent fitness knowledge in the world of weights and weight training.

In 2009 Pagan's Pole achieved PDC approved pole dance school status. Tracy said "In 2009 I saw a massive increase in my student numbers as pole dancing became more acceptable as a form of exercise."

To date, 2010 has been a busy year for Tracy and Pagan's Pole; Pagan's Pole student have competed in the United Kingdom Amateur Pole Performer competitions and Pagan's Pole also submitted a pole dance troupe to perform at Pole Unity. Tracy has also been gaining more valuable pole dancing experience via master classes with Pantera, Suzie Q, Karen Chaundy and Sally Ann Giles. In November Tracy will be adding another form of CPd to her Pole dancing CV when she attends a Pole Secrets instructor training course.

To help with the funding of the AWPC and to create yet more opportunities for welsh pole dancing students Tracy has been organising various pole dancing master classes with renowned pole dancers such as Karen Chaundy (PDC approved pole dance school BodyBarre) and Sally Ann Giles.

Throughout her pole dancing career Tracy has worked tirelessly to educate the public about the fitness pole dancing phenomenon and she regularly performs at shows and events demonstrating pole dancing to the masses. Pagan's Pole are also the official dance act for the North Wales Gay Pride Mardi Gras event in April 2011.