a) Policing and Crime Bill

This had now been passed and was the Policing and Crime Act. Equity had tried to get amendments made and had lobbied to get the name of the licence changed from ‘Sex Encounter Establishment Licences’. These would be known now as ‘Sexual Entertainment Licences’. The other amendments had been to attempt to get more venues exempt from the licences if they hosted entertainment once a week or less. Following the passing of the Act, Equity had put in a submission about ‘grandfather rights’ for existing venues. It was noted that it was now left to local authorities to decide whether they wished to adopt these types of licences and some inevitably will. It was stated that a burlesque event in Bristol had recently been cancelled due to licensing.

Equity had been continuing its campaign to get venues of 200 capacity or less exempted from entertainment licensing and progress had been made. Due to the dissolution of Parliament, however, some of the work had been delayed. The issue had been caught up in the ‘wash’ that happens when Parliament is dissolved and will wait until after the election. It was noted that the Lib Dems and Conservatives were behind giving this exemption but Labour were only in favour of a 100 capacity exemption.

The progress that had been made since the last meeting was as follows:-

The letterhead and poster had been organised at a small cost.

Equity had developed and published the web page. This will be updated with events as they are notified.

The press release and the press packs had gone out and some schools had now registered events.

Future actions would be to:-
Contact some of the big schools to find out what they are doing. Members of the working party undertook to take specific schools in their areas.
Try to get photo opportunities with high profile performers of pole dance, possibly with Equity t-shirts, which working party members would take away with them (see picture below courtesy of Spin City Pole Fitness featuring Maxine Betts.)
A story would be posted on the journalist sites by Equity in the hope of getting picked up.
The magazine Pole2Pole would also be notified along with an online magazine. 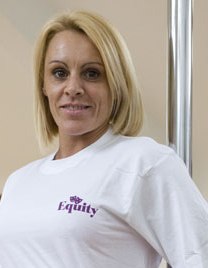 3. Other Recruitment and Retention Events.

Taylor’s Retreat was mentioned with a definite date of 25th July 2010 at which Equity could look at having a stand. Some working party members may be present and able to assist. Ben Taylor would be contacted to discuss.

There were some UKAPP workshops taking place in July / August which had some potential but probably not to have the Equity stand.

Some items were put forward:-

To develop a contract for sub-contractors as some teaching pole had had difficulties with people working for them setting up in competition. Kate and others had such contracts which they could use as a basis for discussion at the next meeting.

Recruitment and Retention was an ongoing aim. There were many instructors who wanted to join but were not eligible. This could possibly be addressed by showcase performances similar to the one in Derby in 2007. A recruitment leaflet could be developed. Equity had just done a leaflet for dancers with strong images including one of Arlene Phillips. A pole dance one along these lines would be possible. A member offered to work on t-shirt designs which could be printed at a place near her studio. Images of high profile performers in Equity t-shirts could be used on a leaflet or the web. The message would be ‘If you’re serious, you should join’.

It was discussed that particularly Pole2Pole magazine were particularly bad at breaching copyright by using photos without consent or payment. Other organisations had also done so. It was thought that the issue of copyright was unsatisfactory in that it was difficult to stop these breaches and too expensive to register trademarks for business names.

On a related topic it was discussed how to give someone the right to use course materials and the school name, possibly through franchising. Some schools were known to have tried this in the past without much success.

It was raised that an organisation was trying to set up a scheme to act as a middleman for students seeking pole dance courses. The schools would have to pay £20 per referral. This was not thought to be a good deal for schools.

A member offered to give tips on how to promote businesses on Google which was thought to be a better idea.

A member raised that Derby University had a pole dance society, the head of which was involved with the Object lobby group.

8. Date of Next Meeting:

This would be 2nd July 2010, venue TBA. Equity’s meeting rooms were unlikely to be available. There were other suggestions made as to the location including Bristol and a decision will be made nearer the time.