About PDC Instructors
By means of our code of conduct and strict membership requirements, we help
self regulate the growing number of pole dancing instructors and studios worldwide.
Join Us
About PDC Syllabus
Internationally recognised Pole Dance Syllabus.
336 moves. 6 difficulty levels.
View It
About PDC
Established in 2009, the Pole Dance Community (PDC) is an advisory
and awarding body for the international pole dancing industry.
Read More
About Dancers
Join the PDC pole dancer grading system - the Advancement and Accreditation Program (AAP).
Join Here 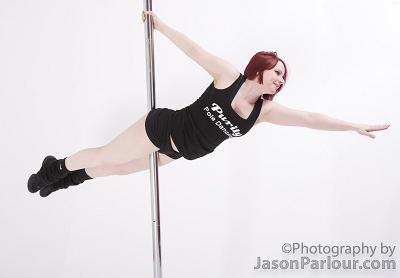 There will be a wonderful opportunity to partake in a pole dancing photo shoot on Sunday 11th April 2010 from 1pm-4pm at the Purity Pole Dancing Studio in Reading. The shoot will cost £25 for 15 minutes

From the 15 minutes you will get around 50 quality images, (in the past 15 minutes has proven enough time to get all the desired pole shots and some
extra ones).

You're recommended team up with a friend and both share the 2 slots, so you can have 5 minutes on and 5 minutes off for 30 minutes to catch your breath and/or change outfit. If you're not able to do this, please make a note on your payment page, or send an email, and Jason can update your details accordingly.

All time slots need to be booked in advance. 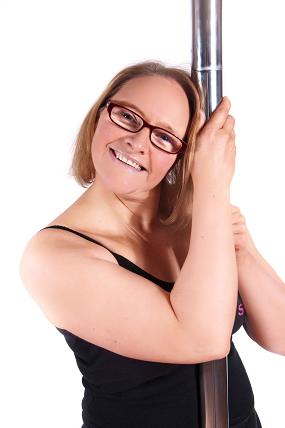 I’m Karen Daly and in November 2008 following the breakup from a relationship I was getting truly fed up of spending too many evenings playing on facebook and scoffing chocolate.  I decided if I wanted to get out of the house rather than be the size of it I’d better do something about it!  Someone sent me an invitation to join a dance group on facebook.  I couldn’t really see myself doing that but I searched through their profile and found JLN Pole Fitness Westhoughton or Pole Fitness Westhoughton as it was then.  Ideal! Something different and just up the road from me.  But could I do it?  Aged 45, pretty unfit, slightly overweight, very little rhythm and no dance skills whatsoever.  I messaged Jess and asked what she thought.  She said as long as I was in good health it would be no problem and if I came the following evening she would do a one to one with me.  First reaction Woah! I don’t think so! But then I thought go for it if I don’t do it now I never will.  I went along to the class feeling very nervous not really knowing what to expect.  I was greeted by a very confident and very able 15 year old who put me at my ease.  I must confess that had I known how young Jess was at the time I booked the appointment I wouldn’t have gone and that would have been a huge, huge mistake on my part.  When I look back now I couldn’t even do the simplest move, couldn’t lift my body off the ground but I had such a good time and Jess was very patient and encouraging.  I was covered in bruises and I ached for days but I couldn’t wait for my next lesson.  Jess took photos of my progress which I gave my consent for her to put on facebook but I still wasn’t ready to tell the world so I asked her not to tag me in them. What would people think a woman my age taking up pole dancing? After a few lessons I started to think wow I can do this.  My confidence was building with every new move and I got frustrated if I couldn’t do something.  It’s a wonder there are no foot marks in the floor from the number of times I stamped my feet at myself.  After about 4 or 5 weeks I got brave and tagged myself in the facebook photos and even used one as a profile pic.  As we know people still have the perception that pole dancing is performed in a sleazy club and just involves gyrating around a pole but having seen my pictures people were genuinely surprised and impressed.  I have had mixed reactions about it.  My family were a little bemused but supportive, friends at church wondered what on earth I was up to and my friends and colleagues at work thought it was very funny but when they saw the pictures from my Polexposure professional photo shoot the amusement turned to amazement.  If I say so myself those pictures are awesome!  Even my 14 year old niece thinks I’m cool so that has to say something! 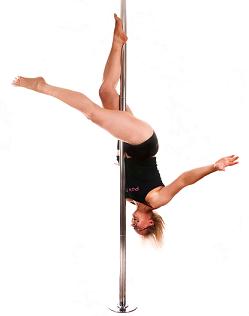 Pole fitness for me is about 4 things

1. Fitness - I have achieved things that at my time of life I never thought I would.  The first time I managed to do the inverted crucifix after weeks of trying to invert was a tremendous moment for me.  Most recently Jess and I jumped around the room screaming uncontrollably when I managed the shoulder dismount.  It has boosted my confidence immensely.  I have lost weight and improved my strength and if I have anything to do with it I will never have bingo wings.

2.  Friends - I was one of JLN’s first pupils when there was just the one pole then after a couple of months we moved into the 4 pole studio and  JLN has expanded again into the new 12 pole studios.  I have attended different classes and met different people and even though most of the girls are a lot younger and slimmer than me I have never once felt that any of the girls are thinking “what is she doing here at her age?” they are very encouraging.  We support and help each other and I have made some good friends.  If you are reading thank you so much ladies, I appreciate you.

3.  Family - JLN has a real family atmosphere.  Jess Leanne Norris is a fantastic teacher.  I am amazed that someone of her age has the drive determination and maturity to carry off this venture but she has and she is such an inspiration to me and the others in her classes.  She is supported wholehearted by her family and it is partly this that gives JLN its family feel.  It is not just a business on her part or for me just a class I attend once a week.  Jess and her family have welcomed me into their home and lives (thanks again Simon for putting up my pole for me).

4.  Fun - Pole fitness is the only thing fitness wise that I’ve stuck at.  The only classes I have missed are when I have been injured or ill and I never think “Oh I can’t be bothered going tonight”.  When I hurt my wrist in summer last year I missed it incredibly.  I hope that I will be an inspiration to others in the same way that Jess is an inspiration to me.  I will never be a natural on the pole.  I wish I had the grace and elegance of Jess rather than that of an elephant but I haven’t and who cares?  I just love it and persistence and practice pays dividends.  Believe me if I can do it anyone can.  Roll on Monday and Starfish here we come!?

and Amber-Rosia, Louise Grainger (Equity’s marketing manager – for item 2 only)

Since the last meeting, Equity had given its go-ahead to design a logo for UKPDD

and Emma had been working with a designer to produce this. He had been given

a brief to produce something for this national event which would work on posters,

banners and other materials and would work alongside the Equity logo. He was

asked for something that was not too glamorous or too ‘fitness’. Emma had

brought along about 25 initial designs for the working party to look at. These were

reduced to a shortlist of 5. It was agreed that these would be circulated to other

working party members for their comments by 29th January 2010. When Louise

Grainger was in attendance she expressed preference for those logos which

work well on badges and stamps etc. Emma had also written some other

email that would go out to the schools. These would also be circulated to the

other working party members for feedback.

Timetable wise, Jonathon (the designer) would finish the work early in February

and the email-shot would go out at the beginning of March, from the email group

participating schools as they signed up. It was clarified that schools would not be

charged for the packs. Replies from schools would be sent to the email account

that had been set up and would need to be collated. Emma would organise

Jonathon to submit an invoice for his work to Equity.

Magazine. This was the only magazine for the industry but it was thought it did

not have the right image for where the working party wanted the industry to be.

that following the demonstration some progress was being made with

government on the licensing exemption for small venues. There was currently a

consultation on this to which Equity will make a submission. Following this it is

hoped that a legislative reform order, which needs all party backing, can be made

in time to make changes before a general election later this year. Equity and the

the offer had only been for those of 100 or less.

mainly resolved except that the wording of the licensing policy had to be agreed.

Currently burlesque entertainment was not being stopped from going ahead.

4. Recruitment and Retention Events. Some further events for potential

membership recruitment were discussed. The following had previously been

final was thought to be in November.

Others were also raised.

Taylor and held in Surrey

5. Copyright issues and guidance leaflet. Some further examples of copyright

were discussed. Generally these were about the copying of others’ choreography

and use of music. It was apparent that this was a common problem and it was

not clear where ‘being inspired’ by someone ended and plagiarism started. It was

possibly similar costuming but not use the same moves. Also in burlesque it was

often the case that a costume change would take place during an act, for

example, from a secretary to Superwoman to the music of ‘Nine to Five’. This

could be done in different ways and depending on the circumstances, could be a

breach of one’s copyright but equally may not be. One working party member was

actually named, without her consent, as being the inspiration for another’s

performance. This could be a breach of ‘moral rights’ as individuals have the right

not to be associated with something they are not involved in. Although this could

have been actioned it had not been. It was also thought that this could give

welcome publicity to the artist who had been the inspiration.

6. Any other Business. A documentary was mentioned entitled ‘Immodesty

noted, however, that the availability of Equity’s meeting rooms was currently in